Deidre Tells the Story of Her Husband’s Mesothelioma Diagnosis

Written By:
Ben Leer
Fact Checked
Fact Checked
Our fact-checking process begins with a thorough review of all sources to ensure they are high quality. Then we cross-check the facts with original medical or scientific reports published by those sources, or we validate the facts with reputable news organizations, medical and scientific experts and other health experts. Each page includes all sources for full transparency.
Reviewed
Written By: Ben Leer,
January 11, 2012

Deidre V. began documenting her experiences with mesothelioma since her husband was diagnosed in 1997. Over the years she has continued to speak out against the asbestos industry. We would like to thank her for taking her time and answering a few questions for us. We are withholding her last name over privacy concerns.

What were the events that led up to Thomas’ diagnosis?

In the November of 1995 Thom had a Myocardial Infarct (or as most people would say, a heart attack).

This resulted in double by- pass surgery being performed in the January of 1996. Thom was told that no damage had been done to his heart and that he would probably live to a ripe old age.

Four months later he was becoming extremely tired and he kept getting what looked like incidences of influenza. He would take time off work and stay in bed. He had a cough. His body would ache. He developed a stiff neck. He never ran a temperature. Tests were done, but nothing was found to be wrong with him. Although it was not for sometime after he died that a radiologist took a look at his previous x-rays and found that there were pleural plaques showing and nobody had picked up on them. On October the 18th 1996; because of the pain that kept occurring on the left side of his chest, more tests were run. Nothing was showing. His x-rays were clear.

A month later, on November the 18th, he was admitted into hospital with pneumonia like symptoms. After that, his left lung kept filling with fluid which had to be drained each week. Over the next two months he was admitted to two more hospitals and more tests were carried out. 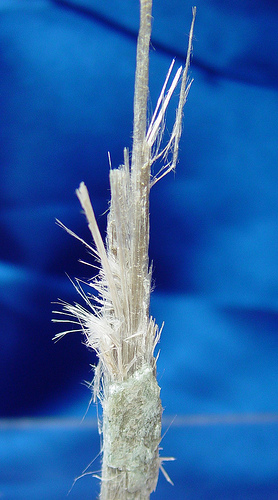 When was Thomas diagnosed?

On the 7th of January 1997, Thom was told the diagnosis. He had Pleural Mesothelioma. There was no cure. He was going to die, and to go home and get his affairs in order.

What were your biggest questions after the diagnosis?

What is mesothelioma. How did this happen?

Was Thomas’ mesothelioma caused by asbestos? If so, can you remember when he came in contact with asbestos?

He came into contact with asbestos through his work as a specialized refractory bricklayer building and repairing kilns and retorts.

Where did you turn to for information?

There wasn’t very much info at all. Found some on the internet.

What was Thomas’ reaction to hearing he was diagnosed with cancer?

Because of the way Thom was told this news, he never really got over it. He literally died that day and merely existed till his actual death on the 1st June 1997.

What has been your family’s reaction?

What treatment options were offered and what did Thomas choose to do?

Palliative care and a couple of weeks before he died he was given one massive dose of radiation that did so much damage that Thom could barely sip water let alone eat anything. Before this treatment Thom was still able to do quite a bit for himself. After he could barely do anything at all and a few days later he went into hospital and died.

Did Thomas travel to a specialty center?

Just to the nearest large hospital for tests to diagnose what was happening to him. No specialty clinic for this disease here at that time.

I noticed on your site you are still active in reaching out to survivors and officials involved with asbestos. What has been their reaction to your emails? Are you getting all your questions answers?

I can’t say with all honesty that the officials I have been in contact with are very interested with the subject of asbestos. They are allowing products containing asbestos to come into NZ and as far as I can see there really is no regulations or policing of this problem. As for survivors. They are in contact with me all the time. I have put many of their stories on my website so people can see the dangers of asbestos and some of the ways that they were exposed to asbestos. www.fibreaware.org.nz

What message would you like to send to the mesothelioma community? (newly diagnosed or survivors?)

Never give up hope and look for treatments. There are many hospital round the world that treat this disease. My website tells of survivors of 7, 10, 14, and 16 years. All people who were told they only had a short time to live. Their attitude to this news was to say, “you can’t tell me I’m going to die soon. You have no right to take away hope. We know people that have survived. We will look for a doctor that is positive and can keep positive.” There are specialists in these areas of treatment now who believe in helping people with mesothelioma, they really care.

We don’t need you to take “hope” away from us.

After my husband died I began looking into asbestos and was horrified by what I found. The greed of people whose only aim in life is to line their pockets. They have no conscience in regards to who they kill in the process. And what is so scary is in a lot of countries they are still allowed to do this.

It has been worrying me that if anything happens and I can’t keep my website going then all the stories I have on it and the info will be gone forever so what I have done is transferred most of it into a book titled.

“Do You Know What Hope Is”

For more information on obtaining a copy of “Do You Know What Hope Is”, please feel free to visit Deidre’s website at: http://www.fibreaware.org.nz/hopeforbook2.htm. If you are interested in other mesothelioma books and pamphlets you can find them at Asbestos.com. We would like to thank Deidre for continuing to be active in the mesothelioma community and sharing her experiences with us.