Canada’s asbestos industry just got a $58 million stimulus from the government right before it was about to collapse. The funds will be used to renovate and reopen the Jeffrey Mine in the town called Asbestos.

It’s unfortunate that the town is named after a mineral responsible for causing mesothelioma cancer. The town’s image has been stained by an industry that has exploited the strength and fireproofing properties of asbestos and it’s about to happen all over again.

The Jeffrey Mine halted asbestos production last year because of financial problems and many saw this as a sign that the Canadian asbestos industry was going to die out. Instead, the mine is set to employ about 425 asbestos miners who will make around $16 an hour.

The president of the Jeffrey Mine continues to challenge the World Health Organization’s estimations of asbestos-related deaths. But by now, we have all recognized the fatal hazards associated with asbestos exposure.

No matter how safely asbestos is mined, the Jeffrey Mine will provide a toxic substance to other countries. One of the largest buyers for the newly mined asbestos will be India, a nation with few asbestos safety laws.

So far the community on the Mesothelioma Center’s Facebook page has been outraged.

What does this mean for the United States? 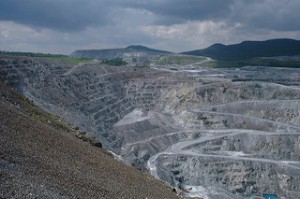 Asbestos hasn’t been mined in the United States since 2002. Although it’s strictly regulated, asbestos isn’t completely banned in the U.S. as it can still be found in various products. The increase in Canadian asbestos production could mean a potential increase in asbestos coming into the U.S.

When asbestos concerns make the news is the U.S., we often hear the Environmental Protection Agency (EPA) speaking out. But let’s be clear, the EPA does NOT track the exchange of asbestos-containing products. It’s up to the consumer to know what they’re buying.