Families Make a Difference With Grassroots Fundraising for Mesothelioma Research

Written By:
Tim Povtak
Fact Checked
Fact Checked
Our fact-checking process begins with a thorough review of all sources to ensure they are high quality. Then we cross-check the facts with original medical or scientific reports published by those sources, or we validate the facts with reputable news organizations, medical and scientific experts and other health experts. Each page includes all sources for full transparency.
Reviewed
Written By: Tim Povtak,
August 29, 2012

James Brennan wasn’t sure how best to assist when his father was diagnosed with mesothelioma. The sense of helplessness grew as he watched his father’s health decline, despite getting the best possible care.

So Brennan ran. And ran some more. And continues to run.

“I feel now like I’m doing something worthwhile to help,” said Brennan, a financial analyst in Alexandria, Virginia. “Everyone helps in a different fashion. Everyone has different strengths. I found my platform.”

Brennan joined with the Mesothelioma Applied Research Foundation to spearhead the Endurance Events fund raising efforts, one of many grass-roots examples of how families and friends of mesothelioma victims have rallied to help the cause of research.

Endurance running can range from 31 to 100 miles and can make traditional marathons look like child’s play. Bike races are 400 miles and beyond.

Brennan has run three 100-mile races in the past two years. His best time was 17 hours in a grueling race, one in which it took more than a week for him to recover physically. His latest event was in Utah at the end of July when they ran a 31-mile race at altitudes of up to 12,000 feet above sea level.

“It’s just something I’ve really enjoyed doing,” Brennan said by phone before the Utah race. “You’re running now with a real incentive. Money for research is just so important. Some people help patients best emotionally, or physically, or in an advocacy role. This was a way for me to be involved and to help fight this disease. Research is critical.”

The goal of the research is unraveling the intricacies of a complex disease. It is crucial to making advances, uncovering new drugs, designing better therapies, making earlier diagnosis. It also is a difficult task with a rare but deadly cancer.

There is little incentive for the pharmaceutical companies to focus research dollars on a disease that touches so few by comparison. Government agencies like the National Cancer Institute often put mesothelioma research projects far down its priority list, leaving the research funding for non-profit agencies like MARF, which has limited resources.

Brennan expects Team Cure Meso to raise at least $30,000 this year for the Foundation, which has provided research grants totaling $7.6 million since the inception of the program in 2000.

The foundation has become the best-known independent source of funding for new mesothelioma research, key in the ongoing quest for better therapies and a potential cure.

Mesothelioma, which is caused almost exclusively by an exposure to asbestos, usually comes with a grim prognosis. Although significant progress was made, progress is too slow in coming. An estimated 3,000 people are diagnosed with mesothelioma annually in the United States.

“You can fund a small grant for as little as $50,000 that could make a breakthrough in mesothelioma research,” Brennan said. “I’d consider that an achievement. It’s pretty amazing what you can do. My father likes the idea of leaving this kind legacy.”

Brennan is just one of many people who jumped into the cause of helping fund research for mesothelioma. And running is just one of the myriad of activities that are being used to facilitate the effort.

Hikes, Runs and Auctions for Mesothelioma 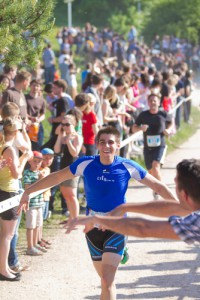 “There are many great research projects in the pipeline right now — real potential for making advances, eventually a cure — and it’s exciting,” said Clare Cameron, executive director of the Pacific Meso Center. “But they need to be funded. And that means raising money. It’s so important to all of us.”

The Pacific Meso Center focuses on the prevention and treatment of mesothelioma. It prides itself on the exploration of innovative ideas within its research program.

In 2011, it opened the first free-standing, international mesothelioma research laboratory in the world, independent of the limitations often imposed by academic and private medical institutions. Progress, though, is usually limited by how much money can be raised.

The Pacific Meso Center organized a handful of LA area restaurants that one day each year donate proceeds to mesothelioma. It did a casino night that raised $60,000 in one evening for research. Supporters that night came from as far away as Colorado.

“Mesothelioma is a little bit different when it comes to fundraising. It’s a little tougher. If a young boy has leukemia, and you tell his story, people immediately start taking out their checkbooks to donate,” said Cameron, who previously worked at the Leukemia Society. “People don’t always have the same sympathy for older people with mesothelioma. It just makes you work harder”

MARF also puts a top priority on its community fundraising efforts. Volunteers like Shelly Kozicki in Missouri and Erica Ruble in South Florida have worked tirelessly for the cause for several years.

Kozicki lost her husband to mesothelioma in 2009 after an 11-year battle. By 2007, she had started the Craig Kozicki Research Grant after raising $100,000 for research. She recently funded a second $100,000 grant in his name, doing it by hosting grass roots trivia nights, golf tournaments, quarter-mania nights, letter-writing campaigns and various other events.

Ruble watched her father die from mesothelioma in 2008, then became inspired by what Kozicki was doing. Ruble started her own letter-writing campaign. In the last three years, she has organized poker tournaments, roller hockey tournaments, triathlons, even garage sales in South Florida to fund mesothelioma research, surpassing the $160,000 plateau to create the Lance S. Ruble Research Grant.

The two of them often speak to mesothelioma families about starting fundraising efforts. There are dozens who have followed their lead, or assisted alongside them.

Mesothelioma patient Larry Davis, for example, helped organize a Miles For Meso road race in South Florida that raised more than $70,000 in three years. It was one of several similar events held in different parts of the country.

Davis, a lifelong runner, died in 2012, just four months after leaving the hospital to attend his final race, but not before setting an example that many others have followed.

“There is a lot of red tape that doctors and researchers have to go through to get funding,” Ruble said. “But this is a pretty tight-knit community once you find it and get involved. When you raise money, you get to see exactly where it’s going, and what it’s doing. And that’s important to all of us.”

Have you raised funds for mesothelioma research? Are you looking for ways? Let us know in the comments below or on Facebook.