When it comes to achievements, professor Bruce Robinson has a list a mile long. Earlier this month he added another one, West Australian of the Year for 2013, but his work with cancer patients puts all his hardware into perspective.

“I always think the patients deserve a gold medal for bravery,” Robinson said.

Robinson, who studied in the United Kingdom and the United States before taking up his post as a respiratory physician at the Sir Charles Gairdner Hospital in Perth, Western Australia, has a special connection to people who deal with mesothelioma and asbestos lung cancer.

As scientific director of the National Centre for Asbestos Related Diseases, he witnesses the horror of asbestos-related diseases. He was involved with more than 2,000 victims of asbestos. Sadly, my husband Brian Kember was one of them.

I first met Robinson in December 1999 on the day Brian was diagnosed with pleural mesothelioma. Our meeting came moments after a young doctor delivered the tragic news. I’ll never forget the way he chose to let us know Brian was going to die.

His exact words were: “Mesothelioma – three to nine months, I reckon.”

How could anyone tell such devastating news in such an uncaring way?

Deeply shocked, Brian and stood rooted to the spot, unable to speak, unable to cry. And this is where Bruce Robinson found us.

His compassion was immediately obvious. Leading us to a cubicle, he sat us down on the bed and encouraged us to speak about the diagnosis. It was a relief to put voice to the anguish we were feeling, and his quiet but caring acknowledgement of our suffering meant a great deal to us both. I will forever be grateful to him for this.

As it turned out, Robinson would oversee Brian’s case and over the two years of Brian’s survival, we met with him on a number of occasions to determine how Brian’s disease was progressing and what treatments were available. I was always touched and grateful for Robinson’s genuine concern over what was happening to Brian and to me.

Robinson’s empathy, his commitment to asbestos victims and his extensive research in the field of asbestos-related cancers pushed him to publish more than 160 scientific papers including the world’s first available blood test for early detection of mesothelioma. 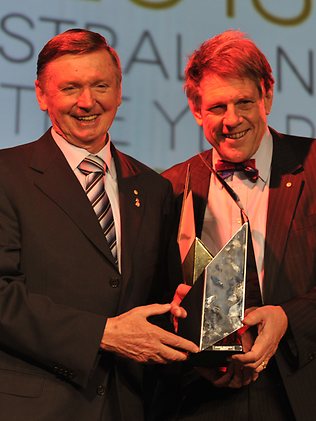 What’s more, Robinson also is responsible for a number of ground-breaking discoveries, including:

Renowned for his valuable research, he has received a number of awards including:

These outstanding medical achievements are not the only strings in the Professor’s bow.

He is also co-founder of the Fathering Project, an incentive to improve the relationship between fathers and their children and to bring better awareness of how a father or father figure can impact the emotional development of a child.

“Society is waking up to the importance of fathers but many men still do not know how to be the dad their child needs,” Robinson said.

Robinson is quick to point out that the term “father figure” applies not only to the biological dad, but also to any other significant men in a child’s life including: step fathers, uncles, grandfathers, sport coaches and teachers.

A devoted father of three, Robinson’s work in this area stems from his relationship with his own father and the many conversations he has shared with asbestos victims, many of whom, upon learning that their life is limited, expressed regret that they had not been a better father to their children.

“I found that in the absence of a strong father figure there’s a big problem in the community when it comes to drug taking and depression,” he said.

Robinson has written three books on parenting and lectures on the subject at schools, to community groups and at work places with amazing results.

Despite his many achievements Bruce Robinson is a humble man, a humanitarian and an inspiration to us all.