Palliative Chemotherapy Can Give Mesothelioma Patients the Gift of Time

When my husband, Brian, was diagnosed with pleural mesothelioma, my subsequent research on the Internet soon made me aware that there was no known cure for this dreadful disease.

I did discover, however, that there were a number of people who were surviving mesothelioma well past the length of time that had been predicted, and that this was due to the medical procedures they had undergone.

Sadly, my hope of Brian achieving the same outcome was short-lived, as it was revealed that Brian’s mesothelioma was in the advanced stages and he was therefore not a candidate for any medical procedures that were available at that time.

One of the most tragic and upsetting symptoms of Brian’s disease was caused by tumor growth pressing against his esophagus, making the opening so narrow that Brian had difficulty swallowing.

Prior to his illness, Brian had been a big man with a hearty appetite. He was also an excellent cook and loved nothing better than cooking up a storm in the kitchen. Living on the coast, fish and prawns were often on the menu, and garlic prawns were one of Brian’s specialties.

When it became impossible for Brian to enjoy the food he loved so much, it took a huge toll on his physical and mental well-being.

For a short period of time, dilations of the esophagus were given, to stretch the opening, which enabled Brian to manage a pureed diet. But the food served to him in this way failed to tempt his eye or his palate. Craving the feel and taste of solid food, he often tried to eat some meat or fish, but this almost always got caught in his throat and caused him a lot of distress.

Watching his struggle upset me greatly, and there were many times when I caught myself chewing my own food to a pulp while willing him to swallow.

Eventually, dilations of Brian’s esophagus were no longer successful, and the opening in his esophagus became so small that he could barely swallow at all.

At this point, we were told that palliative chemotherapy was Brian’s only option, and it became painfully obvious to us that unless chemotherapy could shrink the tumor, Brian’s death would be imminent.

Chemotherapy to Improve Quality of Life

Chemotherapy for Brian was never promised as a cure, but as a trial in the hope of shrinking the tumor to alleviate his symptoms and afford him a better quality of life.

Although there was no other choice available to him, the thought of chemotherapy was abhorrent to Brian and to me.  We had heard stories of extreme tiredness, nausea and hair loss associated with this therapy and worried about how Brian would react to the treatment. The one result we hoped for above all others was that Brian would be able to eat normally again.

Prior to finding out that Brian was to undergo chemotherapy, we were not aware of how many types of chemotherapy there were, or the many ways by which it can be administered.

When I found out that some chemotherapy is given in a tablet form, I hoped that this would be possible for Brian and that he could have his treatment in our own home. But this was not to be.

United by Our Suffering

I will never forget our first visit to the chemotherapy ward. The waiting room was full of people of different ages, genders and nationalities. As I took my seat among them, I realized that, despite our cultural differences, we were united in our suffering and were fellow human beings on the same sad journey.

Brian had a very bad reaction to his first round of chemotherapy and vomited continuously. Unable to retain his medication, his pain spiraled, and he needed to be hospitalized. It took several days to bring his pain and nausea under control, and during this time he lost 8 kilos (17 pounds).

When Brian was finally well enough to come home, it was a huge relief for the both of us, but we were very concerned about his next round of chemotherapy and what his reaction to it would be.

Aware of Brian’s concern, his doctor informed him that the medication he had been prescribed to stop his nausea could also be taken to prevent nausea from occurring. He then instructed Brian to take the medication the night before and in the morning prior to his chemotherapy treatments.

Thankfully, this routine worked very effectively, and Brian had no further incidents of nausea following his chemotherapy treatments.

‘Time-Out’ from Pain and Suffering

Without fear of side effects, Brian welcomed his chemotherapy sessions. And despite his previous doubts about the effectiveness of palliative chemotherapy, there was no doubt that it was working very well for him.

By the end of the second round of treatment, it became obvious that his tumor had shrunk. Brian looked and felt so much better, and I could not get over the change in him.

Eating and drinking normally were once more possible, and it was wonderful to see him plowing into a good steak and enjoying a couple of tinnies (beers) with his friends.

Best of all, he was once more able to go fishing, which was his passion. He never tired of this hobby, and we all loved to see the joy it brought him.

I was so grateful that the chemotherapy treatments had given us a special “time-out” from the pain and suffering of it all.

These were very special days, and although we knew that the tumor would grow again, we were able, for a short time at least, to find quality in our lives. We were determined to enjoy each day to the fullest.

Shortly after Brian’s second round of chemotherapy, I wrote the following poem in my diary: 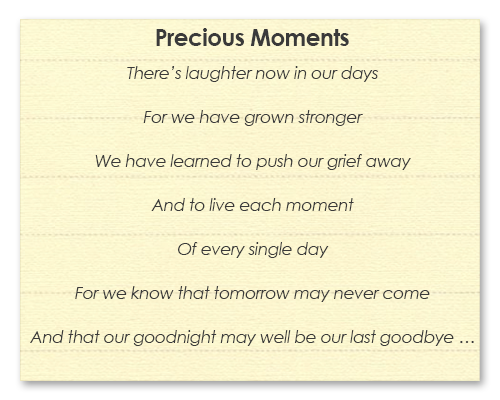 Sadly, after four months, Brian’s tumor began to grow again, and he was too weak to undergo further chemotherapy.

During the two years that I cared for Brian, I learned many valuable lessons. Among them was the fact that we say all sorts of things when we are well and that many of these things have no importance at all when we are in ill health.

Prior to Brian’s illness, he had adamantly stated that he would never have chemotherapy. Yet when this was offered as a way of extending his life, he grabbed it with both hands.

Where there is life, there is hope. Chemotherapy definitely gave Brian a gift of time, and for this, I am eternally grateful.