Medical researchers believe the two primary diseases caused by asbestos exposure – mesothelioma and asbestosis – are underreported on a large scale in the U.S. and other parts of the world. These asbestos-related diseases were especially underreported for decades, before the U.S. government began attributing deaths to them and before the long-term harmful effects of asbestos were widely known.

Today, experts believe asbestos diseases are being diagnosed and recorded more accurately than before, but there is still a discrepancy between reported statistics and the actual number of diagnoses. That is because the symptoms of the diseases remain hard for patients to detect and for many doctors to diagnose.

As awareness continues to spread and worldwide death certificates become more detailed, the gap between reported cases and actual cases is expected to continue to close.

All types of asbestos cancer were considered underreported in the U.S. for decades leading up to 1999. Before that time, the federal government did not officially record any deaths from this cancer. Any incidence and death rate reports were unofficial estimates. 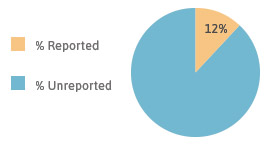 One study showed that only 12 percent of mesothelioma deaths were properly reported in the U.S. before 1999.

Experts now know these estimates were highly inaccurate. In fact, the Environmental Working Group (EWG) estimates that at least half of all mesothelioma incidences prior to 1999 were never reported. A similar study reported the problem was much worse and that only 12 percent of mesothelioma deaths were correctly reported. The rest were misdiagnosed or misidentified on death certificates.

Underreporting Outside of the US

It is important to note that this study’s estimate was based on available figures from other countries, which some researchers say were largely inaccurate. The study did not take into account the underreporting that occurred within the countries that recorded official mesothelioma deaths. For example, doctors estimate that in Italy more than half of all asbestosis and mesothelioma cases still go unreported each year.

Deaths Reported in the US

In the U.S., errors in incidence and death numbers are much higher. Misdiagnoses of asbestos-related diseases lead to lower-than-accurate incidence reporting. Rampant misdiagnoses also logically lead to errors on death certificates, meaning mortality is also underreported. 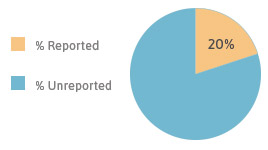 As few as 20 percent of mesothelioma deaths are properly reported in the U.S. today.

Occasionally, the actual cause of death is discovered at autopsy. But according to the Agency for Toxic Substances & Disease Registry (ATSDR), death certificates are rarely altered or supplemented based on such autopsy findings. The report estimates that only 20 to 29 percent of mesothelioma deaths are accurately reported in the U.S.

CDC records show that at least 2,500 people die in the U.S. from mesothelioma annually. And by ATSDR estimates, this figure could reflect as little as one-fifth of the actual total, meaning as many as 12,500 people die of this cancer annually.

As awareness of asbestosis and mesothelioma grows, higher portions of affected people are expected to receive more accurate diagnoses. Medical experts believe this shift will lead to more accurate reporting on death certificates and better estimates of the true impact of asbestos use.