Update: George Schottl, a late-stage mesothelioma patient in Sweden, lost his fight against the cancer Wednesday, Jan. 14, 2015. He was 46. This is the first installment of a two-part series he wrote for Asbestos.com. We have faith his personal story can inspire hope and strength in others walking along the same path. Read Part II about Schottl’s life beyond his diagnosis

It was early 2006. Life was good and going as planned. My new company, only in its second year, was doing extremely well. Everything was falling into place.

I was about to marry Sara Svensson, my life partner, my true love, the one who always made me laugh. We had already talked about kids, their names and buying a beautiful home — a four-winged farmhouse in the country with ceilings painted in the late 1700s.

The future looked so bright, but suddenly, I was having trouble breathing.

It seemed like the air wasn’t reaching my lungs. I kept ignoring the problem. I was still strong as an ox. We had just walked more than a mile to the top of the Katrin Mountain in Austria. I had some breathing issues there, but I blamed it on the high altitude.

You never could have guessed I would soon be diagnosed with malignant pleural mesothelioma.

On the positive side, I’ve lived more than nine years beyond my initial prognosis of 3-6 months. But recently, my health has worsened. I developed an infection in my abdominal cavity, the tumors in my pleural wall are growing and I am now connected to oxygen machines whether I’m inside or outside.

These complications must clear before I can return to chemotherapy.

I’m not sure how much longer I have, but I wanted to share my story with others undergoing similar situations with mesothelioma.

I had contacted my doctor about the breathing problems a few times. And I was having issues with a gag reflex, too, but I was continually being told everything was OK. They kept saying I had a virus. The doctor kept telling me everything was alright with my lungs, so I just focused on the upcoming wedding and honeymoon.

We had a giant wedding in church with lots of friends. When my beloved Sara walked through the door of the church with her hand on her father’s arm, tears ran down my cheeks. I was so happy. The wedding party was in Trolleholm, a Swedish castle. For the honeymoon, we went to Isla de Margarita, off the northeast coast of Venezuela. 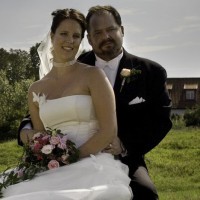 It was there where I became more worried about my health.

My breathing worsened. Instead of enjoying the lovely moonlight walks with my beloved wife on the romantic beach, it became an effort because I was panting. Wheezing around your new bride was a bit weird. I still had the physique of an ox, but I didn’t feel right.

When we returned from the honeymoon, I went back to the doctor. His theory was that I was just exhausted from working so hard. I finally went to a lung specialist who saw things differently. He found lots of fluid around my lungs. He was amazed by what I had been doing.

He told me to pack my bags and check into the hospital the next morning. Imagine seeing me walking down the hospital hall, a 6-foot-tall, 253-pound, green-eyed man with a beard. I probably looked like an evil football player.

I was only 38 years old at the time. As I walked down the hospital corridor, I only saw elderly people connected to tubes and machines. There was no one my age.

I introduced myself to the nurse and told her I would be there only a short time.

I was so wrong.

Stunned by the Diagnosis

The first surgery took take place on the day I was admitted, and it was an ordeal.

It involved inserting a drainage tube through my pleura (lining around the lungs) to empty all the fluid.

First, I had to kneel next to the bed because the doctor was a very short woman who could not reach the area where the pipe would be inserted. After much panting, pushing and muttering, she called for another doctor who was closer to my size. With all the strength they could muster, they finally inserted the tube through the cartilage between my ribs and into the pleura.

I didn’t utter a sound. The doctor asked me if it hurt. He said normally patients are screaming, but I told him that screaming wouldn’t help. He shook his head and muttered something about Vikings.

Over the next several days, they drained an incredible 11.1 quarts of fluid from my chest. They explained that my right lung was at the bottom of the pleural space and compressed to the size of a tennis ball. Doctors performed laparoscopic surgery, also known as keyhole surgery, to take a biopsy.

It was on day 23 that I finally was diagnosed. The tube was disconnected, and I was escorted into another room. The doctor looked worried, even before he broke the news to me.

I had malignant mesothelioma, a rare cancer. I was not too worried, at first, because I live in Sweden, where the overall cancer survival rate for men and women is more than 60 percent. We have the highest cancer survival rate in the world. And the doctor said chemotherapy might prolong my life.

He realized that I wasn’t taking the news seriously, so he told me the prognosis was poor. He also said it already had spread throughout my chest, that I was stage four, and that I should not count on many months of living. The doctor who did the biopsy said I was full of tumors everywhere.

That’s when it hit me.

How could I tell the person I had just returned home with from our honeymoon that I would die in a few months? How could I explain this to my family and friends? The doctor estimated 3-6 months of life and the words echoed in my head. Sara, my beloved wife, came into the small room and the doctor repeated everything again. Then it came over me, the shock and pain of giving Sara such a horrible wedding gift. All my life, I have always solved problems. I have been the one who solves everything, much like The Wolf from “Pulp Fiction.” Now I was the problem. How could I solve this?

I decided not to be weak, not to kneel to cancer. The only time I’ve been on my knees was when I proposed to my wife. She is the only one who could get me down on my knees. No damn cancer is going to do that. I decided to stand up straight, strong, stubborn and resist.

Treatment did not go smoothly at first. It took just a few days before I got sepsis (a life-threatening infection spread through the bloodstream). It sent me to an infection clinic for a few weeks of treatment.

I had my first chemotherapy treatment in late January 2007. It consisted of six rounds of cisplatin and Alimta. The Alimta was pretty good and effective. Cisplatin was an evil bastard that really is effective, but also a little nasty to the kidneys and liver. Six rounds, I thought, was nothing. As a sailor once on a Swedish warship, I thought I could cope with anything.

I was so wrong.

Before we found the right nausea drugs that worked on my body, I threw up like a calf. I threw up constantly and had to go back to the hospital to get intravenous fluids. Zofran worked well as an anti-nausea medicine. It changed my side effects from always having my head in the toilet to a more stable life as a cancer patient.

The treatments continued until a doctor advised I contact my family because I only had a few days left to live. He said my liver and kidneys were failing. But before I told anyone, those organs suddenly woke up, and I was on my way home.

Since then, I have learned the difference between life and death can be determined by the doctor you have.

Then there was the issue of swelling, a fairly common symptom in cancer patients receiving chemotherapy and cortisone. My swelling was not normal and continued to worsen. The doctors who took care of me turned pale when they saw how badly swollen I had become.

I gained a tremendous amount of weight. My hands, arms and legs were so filled with fluid that I could not bend. My skin seemed to buckle and crack when I moved.

That’s when I knew I had hit rock bottom.

George Schottl, from Gardstange, Sweden, was diagnosed with malignant pleural mesothelioma in 2006 at age 38, a stunning revelation for someone so young and strong. He died Jan. 14, 2015, shortly after Asbestos.com published this first-person account of his journey. He was 46.

Adam Lee is a personal trainer and blogger who writes for The Mesothelioma Center and his personal fitness blog. After losing his stepfather to mesothelioma, he offers his training services to raise money for cancer research.