Weathering a Mesothelioma Diagnosis After a Natural Disaster

It was 1999, and my husband, Brian, and I had been happily married for 30 years and living in Exmouth Gulf in Western Australia.

Brian’s love of fishing motivated our nearly 800-mile move from Perth to Exmouth Gulf, where the warm waters are home to myriad tropical fish and in close proximity to the famous Ningaloo Reef. It’s a fisherman’s paradise.

He seized every opportunity to reel in some big fish on his dingy. I sometimes accompanied him and pulled in a few big ones of my own. When we weren’t fishing, Brian worked at the local prawn factory, while I ran my own small retail shop selling Balinese merchandise. I had plans of moving my business to a larger spot too.

We also had purchased a new house, and it was exactly what we wanted. But we couldn’t move in for a few months because the owners were still living in it. While I dreamed of making curtains and buying new furniture, Brian planned a backyard patio with a flower bed. 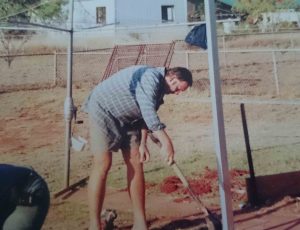 He spent a lot time drawing up the plans. “I can hardly wait to get started,” he told me. “It is going to be amazing.”

But the unpredictable force of nature and an unexpected mesothelioma diagnosis cut our dreams short.

On March 22, 1999, severe tropical cyclone Vance struck Exmouth Gulf with a record wind gust speed of 166 mph — the highest measured on the Australian mainland. The Australian Bureau of Meteorology classified it as a Category 5 cyclone. Damage from the storm surge and sustained winds totaled more than $100 million.

Brian and I sought shelter in a brick building. The sound of the storm absolutely terrified us. When it was safe to venture out, we didn’t recognize the town.

Row upon row of obliterated and severely damaged houses stretched as far as the eye could see. Much to our relief, our new house had not suffered any damage. The same could not be said of our rental property. 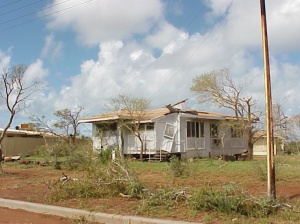 Loss of Home and Comfort

Parts of the roof were missing, and all of the windows were broken, exposing the inside of the rental house and all of its contents to the elements. Personal items were scattered around the yard and the street. Heavy branches torn from the large poinciana trees on our fence line piled up in the driveway and the verandas, blocking access to both entrances.

With the help of a neighbor and his chainsaw, we managed to clear a path to the front door. When we entered the house, everything was sodden and muddy. Wind and rain damaged most of our furniture, and shattered glass was everywhere.

After working for hours to clean the mess, we made a couple of rooms livable, but there was little comfort to be found. It was extremely hot and humid, and keeping cool without electricity was impossible. Crude fans made out of folded cardboard didn’t help. We also lacked fresh water to quench our thirst.

Eating wasn’t easy either. Food stored in the fridge and freezer quickly spoiled. Canned food became our staple diet for a number of days. We relied on torches and candles at night. Decent sleep was hard to find. When we did doze off, the unrelenting buzzing and biting of mosquitoes roused us from our sleep.

Throughout it all, Brian was my rock. Whenever I cried over the situation or the loss of a personal possession, he was always there to comfort me.

“They are only possessions,” he would say to me. “We will always have each other.”

The Australian Army brought bottled water and hundreds of blue tarps to cover the damaged roofs. Extensive flooding forced officials to shut down the road into the town. That posed a dilemma for me: No tourists means no business.

Like other business owners in Exmouth, I relied heavily on tourists to make a profit. Without the regular influx of tourists, I worried I might not be able to meet the costs involved in moving my business to a new location.

Despite my concerns, I relocated my business and was glad I did. I loved my new shop. It was so nice to be operating out on the street after being enclosed in a small arcade. Meanwhile, Brian and I found temporary living accommodations that would see us through until we moved into our new home.

In anticipation of tourists returning to the town, we travelled to Bali, Indonesia, to purchase stock. Because my new shop was much larger than the previous one, we needed plenty of merchandise. Most of the time I did the choosing, and Brian did the bartering.

We were a great team. Tired but excited about our purchases, we spent a few days relaxing before flying out of Bali. There would be a lot to do when our stock arrived.

A period of unexplained breathlessness not long after we returned to Exmouth from Bali led to Brian’s pleural mesothelioma diagnosis.

The childhood he spent in the asbestos mining town of Wittenoom caused the asbestos-related disease. He was 52 at the time of his diagnosis, and his prognosis came as grim news: Three to nine months to live.

Overwhelmed with shock and sadness, I remember thinking this can’t be true. How can this be happening when everything was going so well? The new stock had arrived, my shop looked amazing and we were only weeks away from moving into our new house. Brian and I had never been so happy and excited about our future.

With all hope of a future with Brian gone, I could not think of the house without feeling sadness. I no longer looked forward to moving into it. What was the point when Brian was going to die? I also wasn’t sure Exmouth was where we needed to be. I wanted the best possible medical treatment for Brian and doubted the small local hospital with one attending doctor could provide it.

There were also my feelings to consider. I was already grieving and felt completely out of my depth. If we remained in Exmouth, who would be there to support me? The thought of being alone when Brian’s life came to an end terrified me. I wanted — and needed — to be close to my family.

When I told Brian I wanted to return to Perth and why, he wouldn’t hear a word of it. He loved the life he lived in Exmouth and was not about to let mesothelioma take it from him. Loving him as I did, I put my needs aside and agreed to stay. Not wanting to spend one precious moment away from his side, I put my business up for sale. Fortunately, it sold quickly.

Weathering the Aftermath of Our Personal Storms

Despite my reservations about remaining in Exmouth, I realized it was the best thing I could have done for Brian. He carried on with life as best he could and never complained about his disease. When he could no longer lift heavy objects, someone was always there to lift them for him.

It was hard not to fall in love with the house and our custom renovations, especially the outdoor patio built exactly to Brian’s plan by his loyal workmates. When the built-in garden bed was completed, Brian and I chose the plants from the nursery, not an easy task when Brian liked every plant he found. 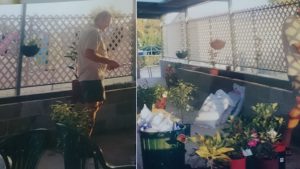 When the garden was finally ready, it took my breath away, and so did the look on Brian’s face. His dream had become a reality, and he was truly happy.

Brian and I spent almost a year in our new home. Our children, Michelle, Clint and Julie, often flew up to be with us, and we spent many happy hours together out on the patio.

Despite the natural and personal disasters that marked 1999 for me, memories of the happy times comfort me now that Brian has gone.