Around a year after my husband Brian was diagnosed with pleural mesothelioma, our son, Clint, called to see if he would like to accompany him on an errand.

I was pleased when Brian readily agreed. He needed a break from the house and thoughts of his illness.

Although Clint made no mention of where they would be going, I had a pretty good idea. As keen gardeners, they loved to check out plants at the local gardening center, and I fully expected they would return with a box full of seedlings and some fertilizer.

Instead, they came home with Rufus, a tan and white Jack Russell terrier puppy with the most beautiful brown eyes I had ever seen.

It was love at first sight. I turned to Brian and knew instantly he felt the same way. The look on his face almost made me cry.

It had been so long since I saw him that happy.

Rufus Changed Our Lives for the Better

Pleased to add Rufus to our family, I had only one concern.

Would our 10-year-old dog, Ben, be jealous of his new brother? The last thing I wanted was for our faithful and loyal companion to be unhappy.

Turns out, I didn’t need to worry. Ben fell under Rufus’ spell just as we had and was soon doing everything he could to make him feel welcome. For a big dog, Ben was incredibly gentle and very protective of his little brother.

It was amazing how quickly Rufus changed our lives for the better. Living in the shadow of mesothelioma was emotionally draining for Brian and me, but it was impossible not to be uplifted by the presence of this little bundle of energy and love. 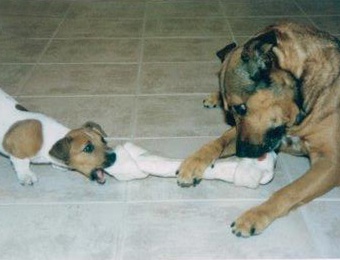 Rufus sharing a bone with his big brother, Ben.

Each morning, we awakened with the anticipation of spending time with the little rascal, who, typical of his breed, had boundless energy and an insatiable desire for attention.

Quick to learn, he was soon doing lots of tricks. Brian and I always tried to come up with new ones to teach him. When he occasionally learned tricks of his own, we could not help but laugh.

It was also good to have something positive to talk about when friends and family came to visit. Focusing attention on the antics of Rufus and Ben, who had taken on a new lease of life since Rufus came along, took attention off Brian’s illness. It made each visit a more pleasurable experience for all involved.

Despite his seemingly endless energy, Rufus did succumb to some rest during the day, usually on Brian’s lap or mine, where he was sure to get countless pats of appreciation.

Brian and I loved this. It was amazing how good it made us feel.

Sadly, the first year of Rufus’ life turned out to be Brian’s last.

He died at age 54, another innocent victim of asbestos. Widowed at 51, I felt lost, lonely and more than a little afraid of the future. After being with Brian for 37 years, it was difficult to adjust to life without him.

Thankfully, I still had Ben and Rufus to look after, and in their own way, they looked after me.

About seven years after Brian’s death, Ben joined him. At age 17, he lived a long life for a dog, but it was not near long enough for me.

For a while, Rufus seemed lost without Ben, but nothing could dampen his love of life, fun and adventure. 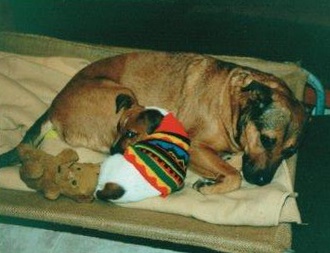 Rufus and Ben napping together.

By age 14, Rufus was still energetic with no signs of slowing down, but things changed significantly over the following 12 months. Cataracts gradually stole his eyesight. Not long after, he became almost totally deaf.

Remarkably, this did not stop him from enjoying life. His appetite remained strong as did his energy. Thanks to his familiarity of our home, he was soon making his way around without problems, even managing to go in and out of his doggie door when nature called.

Playtime remained his favorite time of the day, and I made sure he got plenty of exercise. Although he could no longer chase a ball, he loved playing tug of war — I only had to put the pull toy in his mouth to get him going.

Hopeful to See My Loved Ones Again

Who knows how long Rufus would have lived if he had not developed dementia?

The cruel disease caused him to become restless and confused. No longer interested in playtime, he either slept or walked around in endless circles, becoming very agitated in the process.

It was extremely upsetting to watch. Picking him up and attempting to cuddle him did not fix the problem. Often, he continued to circle while on my lap, unable to stop something far beyond his control.

The day I said goodbye to my beautiful Rufus was one of my saddest days. He came into my life during Brian’s illness and gave us something to look forward to each day.

Such joy he gave us then, and such comfort he gave me after Brian’s death.

It broke my heart to do what had to be done, but I did not want to see my best friend suffer any longer. He deserved to be laid to rest. I miss him every day but draw comfort from the thought he is now with Brian and Ben.

Hopefully, I will see them all again one day.