Mesothelioma Fundraiser ‘Soccer for a Cure’ a Local Success

An athletic young man in a dri-fit jersey limped over to the sidelines, clutching a tube of Biofreeze numbing gel.

Sam Cabrera was one of the 36 soccer players who spent their weekend participating in Soccer for a Cure a fundraiser and awareness event for mesothelioma.

The players took the field in honor of James Bard Sr., who passed away from pleural mesothelioma in 2009. Bard’s son organized the fundraiser in hopes of raising at least $50,000 for the Mesothelioma Applied Research Foundation.

If they could set a new world record for the longest soccer game, it would just be an added bonus.

After playing through the night, Cabrera gratefully took a seat. His team had scored more than 100 goals and there was still a lot of game left to play.

Sacrifices to Raise Funds and Awareness

Thirty hours into the 70-hour game, the players were definitely showing signs of wear. 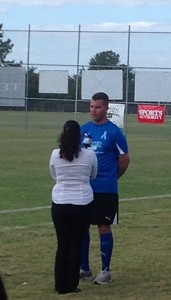 Some attended to blisters and cramps on the sidelines. Others stood in line for hot showers in an RV parked at the side of the field.

“I don’t think anyone realized the drain it would take on the players,” said attendee Bob Schneider, whose son Rob was in the middle of a shift.

“The first four hours, we were playing really hard,” said player Katin Amin. “Now every time you kick, it hurts. We’re slowing down a bit.”

Still, they had no plans to quit before it was time.

Many of the players had never heard of the disease before they became involved with the fundraiser.

“To be fair, I knew nothing about mesothelioma. I agreed to play because I wanted to break the world record. When I heard James’s dad passed away from it, it became a lot more personal. That became my second inspiration for the game,” said player Katen Amin.

Most attendees were finding out about the disease for the first time as well.

Some wandered over from the neighboring soccer fields, curious about the raffle tables and the local news trucks. Many stayed to chat with volunteers or flip through mesothelioma information books at the entrance.

Not everyone was learning about the disease for the first time, though.

Barbara Bard came back to the city to support her son’s efforts.

“We used to live here, but 17 years ago we retired in Monticello (Fla.). We had hoped for a long retirement, but” Bard trailed off.

“I think my husband had a suspicion. He used to tell me about sleeping on a bunk below the flight deck and waking up covered in asbestos dust,” Bard recalled of her husband. “We’ve lost friends to it, too, who got it from asbestos in their laundry.”

“What crushes us so much is that they knew the dangers in the 1930s but didn’t do anything about it until the ’80s  so you have 40 years of people still using it. I just hope things are different for them.”

Thanks to efforts such as this fundraiser, there’s a chance that someday, it just may be different after all.

After graduating with an English degree from Southeastern University in 2010, Faith Franz came on board as a health and wellness writer for The Mesothelioma Center.