Brothers Kevin and Gerry McCarthy won’t be there physically when the dressed-in-green “Irish Stampede” gathers again later this month at the Paramount Ranch in Agoura Hills, California to help raise money for mesothelioma research.

They will be watching from high above, arms draped over each other’s shoulder, saluting approval with pints of Guinness Stout raised high for proud Irishmen who died much too young.

The McCarthy brothers are the spark behind the Pacific Heart, Lung & Blood Institute’s third annual 5K Walk/Hike for Mesothelioma held on October 12.

Both died of mesothelioma, the rare and aggressive cancer caused almost exclusively by exposure to asbestos.

Kevin died in 1997, at age 52, just two months after his peritoneal mesothelioma diagnosis. Gerry died in 2012, at age 60, a little more than a year after his diagnosis of malignant pleural mesothelioma.

They left behind a big, strong-willed Irish family determined to help others avoid the devastation and despair they endured.

“This is a cause that needs our help,” said Rosanne McCarthy, Gerry’s wife of 34 years and mother of his four sons. “It has become one of my passions. You realize in life, there are things more important than yourself. This is one of them.”

The goal of this year’s event is to raise $75,000 to help advance the innovative research at the Pacific Mesothelioma Center by renowned thoracic surgeon Dr. Robert Cameron and his staff.

The Irish Stampede was the nickname given to the McCarthy contingent and it’s an integral part of this fund raising event. It will include McCarthy brothers, sisters, sons, grandsons, wives, nieces, nephews, others scattered across the U.S. and a dog named Minka. 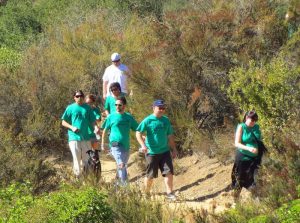 The “Irish Stampede” walking on trail to raise awareness for mesothelioma.

“This has become like our Christmas/New Year’s reunion time each year,” Rosanne said. “For us, it’s like a celebration of their lives. It’s a great time, a very positive time to tell stories that make you happy. We don’t shed tears there. We laugh and have a good time to help a good cause. ”

Mesothelioma has no cure. Because it’s a rare cancer, it receives little financial support for research projects, making events like this crucial to finding better treatment options for future patients.

“We just want to help any way we can, to get the word out. With a rare cancer, it’s like you are fighting all alone sometimes. You know what devastation it causes, but not many people do,” Rosanne said. “We’re trying, even if it’s just bits and pieces, to make a difference, and find a way to stop it.”

The rarity of mesothelioma makes it all the more unusual that two brothers, in different professions, both died from it, several years apart.

Kevin was an attorney in New York, raised in the same brownstone home as his five siblings. Gerry became a service manager in the heating and air conditioning business. He moved his young family to California in 1988.

Gerry was shocked by Kevin’s original diagnosis, knowing little about the disease that took his brother so quickly. Yet 14 years later and 3,000 miles away, when Gerry started having symptoms like shortness of breath and a nagging cough, and a doctor told him he had excess fluid on his lungs, he suspected what his problem was, according to Rosanne.

“I still remember Gerry coming home from the doctor, and saying ‘I think I have mesothelioma,’ and I thought no way. Two weeks later, he had a biopsy, and sure enough, that’s what it was. I was stunned,” Rosanne said.

Gerry and Rosanne found the nearby Pacific Mesothelioma Center and Cameron, one of America’s most respected mesothelioma specialists. Gerry lived 13 months after his diagnosis, but it was more than he expected, leaving an indelible impression on Rosanne.

Between his surgery in May and the start of follow-up treatment in July, the couple took a cruise to Alaska with family and friends, delaying the start of chemotherapy for a week.

“We almost didn’t go because he was supposed to start treatment that week, but he had a wonderful time and left some wonderful memories for all of us,” Rosanne said. “He knew he was dying, but it was the last big thing he was able to do. It was for the family.”

Rosanne, who has worked as a registered nurse the last 24 years, helped Gerry considerably through his final weeks, rarely leaving his side.

She and the several members of the family went to Ireland last summer, retracing steps their ancestors took, taking the trip that Gerry always had talked about taking one day.

“Going to Ireland was something Gerry always wanted to do but never got the chance,” Rosanne said. “We had a few drinks, made a few toasts, in his honor. I miss him terribly now, but I’m glad to share his story, in hopes of helping others in the future. He’d be glad.”