But she never stopped helping people.

She served on her local community board as a selectman for three years, volunteered with different service organizations and now works at her local pharmacy in her small town of Cornish, Maine.

As a pharmacy tech, she still sees many of the patients she treated during her nursing career.

“It’s like I still have that contact with people, and relationships that were built over years are still there,” Ward told The Mesothelioma Center at Asbestos.com.

Ward also works as the lodging manager of a quaint hotel tucked away in the unspoiled lake-and-mountain region of Maine. A few days each week, she works at Foothills Physical Therapy and Fitness Center, a local gym.

Staying busy hasn’t been an issue.

The six-year survivor has outlived three of her five beloved dogs. She still has two of her four dachshunds: Little Bit, 16, and Zera, 14.

“It’s amazing because I was the one that wasn’t supposed to be around, and worried about where my dogs were going to be and who was going to take care of them,” she said.

October 3 marked six years since that procedure. The surgery was intense, and the recovery was rough.

But it was all worth it.

“Out of those six years, the quality of the five and a half have made it worth the surgery,” she said. “And I wouldn’t have had that if not for Sugarbaker.”

Ward was treated at Brigham and Women’s Hospital in Boston right before Sugarbaker’s transition to the Baylor College of Medicine in Houston, where he created the Lung Institute, one of the nation’s top mesothelioma specialty centers.

“It was like an office in turmoil,” Ward said of her time at Brigham. “I felt like I was being taken care of, but it was almost like you’ve got a friend and your friend moves far away.”

Ward was given the option to go to Texas, but chose to stay at Brigham, working with thoracic surgeon Dr. Raphael Bueno for much of her postoperative care.

“People from all over the country came to Boston and later to Houston because of Sugarbaker,” she said. “For me, it wasn’t just about Sugarbaker. It was a whole team, and the rest of the team was still [at Brigham].”

For the past four years, Ward has been under the care of medical oncologist Dr. David Jackman at Dana-Farber Cancer Institute.

It was Jackman who told her about Sugarbaker’s passing. The renowned surgeon died Aug. 29, 2018. He was 65.

“I sat there, and I thought about how he was younger than me,” Ward said. “Here I am, and he’s not. How crazy is fate, that it would take someone who could offer so much and leave me here? It’s just amazing that I’m still here.”

Nothing That the Eye Can See

In August 2014 — close to two years after her surgery — CT scans showed Ward’s mesothelioma had returned. Her doctors at Brigham sent her to Jackman at nearby Dana-Farber in Boston.

“He’s a straight shooter. He shoots from the hip and tells it like it is,” she said of Jackman. “He and I get along great. I told him up front who I am and that I don’t want anything held back or sugarcoated.”

Jackman told Ward her cancer was back and curing it wasn’t an option. He wanted to be selective when it came to her treatment plan.

“He said it was never going to go away. It was a matter of containing it,” she said. “The bottom-line was to utilize the treatments wisely because you can only handle so much.”

Ward was prescribed a double-chemotherapy regimen for three months and continued taking Alimta (pemetrexed) for the following nine months.

The Alimta started to take its toll in on Ward’s kidneys, but the treatment was effective. Her tumors shrunk so much you could no longer see them on scans.

“[Jackman] told me that even an oncologist used to looking at mesothelioma on a CT, they wouldn’t be able to tell I had it without looking at my diagnosis,” she said.

Ward’s cancer has remained that way for the past year and a half. She has one six-month checkup left, then she’ll visit Jackman every 12 months.

“Everything that [Jackman] offered, he and I talked about. I made the choices and he respected those choices,” Ward said. “Any problems I was having, he would listen to and customize the treatment. I felt everything was done with my best interest at heart.”

Ward counts herself lucky that she received such great care at some of the nation’s top mesothelioma specialty centers.

“Sugarbaker gave me the life to live and Dr. Jackman helped give me the quality of that life and keep me here,” she said.

Ever since her surgery, Ward no longer celebrates holidays. Her cancer helped put things into perspective.

“I tell my family that you need to celebrate every day that you’re alive and don’t need to save it for a couple times a year,” she said. “I told them you have family gatherings during the year, tell people you love them, give people things outside of holidays and birthdays. Celebrate everybody in your life every day. There isn’t just one day to do it.”

Ward is surrounded by family. Her two brothers live nearby. Most of her nieces and nephews are local and have families of their own. 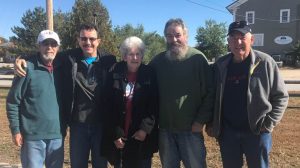 She constantly urges her brothers to get regular medical checkups. One worked on Navy supply ships during the Vietnam War. Her other brother spent years working as a plumber. Both are high-risk occupations for asbestos exposure — the main cause of mesothelioma.

Unlike her brothers, Ward never worked blue-collar jobs. She believes her asbestos exposure is related to working in a hospital decades ago that underwent a major renovation.

“I’ve got two people in my family that are prime candidates [for mesothelioma],” she said. “It’s not something they ever considered before. And they wouldn’t have even thought about it after my diagnosis had I not said to them that because of what you do, this is a possibility.”

The nurse in her is always worrying about the health and safety of others. Her experience with cancer has only strengthened that notion.

Ward urges others to be their own advocate and ask their health care provider to check for rare conditions such as mesothelioma, noting that early diagnosis is one of the most important factors of survival.

“My big concern is that anyone that is having respiratory issues, that [mesothelioma] is one of the things on the checklist,” she said. “It’s not like being in a car accident where it happens, and this is how you feel. Just like me, unbeknownst to you, this is something that you were exposed to in your history, and now it’s coming back to haunt you.”

© 2020 by Asbestos.com and The Mesothelioma Center. All rights reserved. | Last Modified February 4, 2019