Written By:
Tim Povtak
Fact Checked
Fact Checked
Our fact-checking process begins with a thorough review of all sources to ensure they are high quality. Then we cross-check the facts with original medical or scientific reports published by those sources, or we validate the facts with reputable news organizations, medical and scientific experts and other health experts. Each page includes all sources for full transparency.
Reviewed
Written By: Tim Povtak,
June 6, 2012

She was afraid of leaving her young children without enough good memories of their mother.

Shortly after doctors told her she had peritoneal mesothelioma, she quietly picked out, and paid for, her own cemetery plot, a nice shaded spot with a great view not far from home.

Then she gathered her family — a loving husband and two beautiful children, ages 10 and 12 — and told them the truth, but not quite all of it.

“We’re going to Disney World,” she told them that day.

And off they all went.

“It was hard telling the kids what was happening, but I just wanted to make sure they had enough memories, and pictures of us together, before I got real sick,” said Tammy, whose last name is being withheld over privacy concerns. “It was like that old Tim McGraw song: ‘Live Like You Were Dying.’ So we loaded up and took the kids to Disney, took a ton of pictures. Doctors told me I had about six months to live. We did a lot in that time.”

Surgeries and Chemotherapy for Mesothelioma

Tammy, who lives in Cartersville, Ga., defied the odds and lived longer than she or anyone else expected. Multiple surgeries, exhaustive chemotherapy, extensive radiation, and a dozen different medicines she takes daily now have slowed an aggressive cancer, allowing her to become an inspiration for mesothelioma patients everywhere.

“I’ve been lucky, but I’m more blessed than lucky,” she said on the phone from her home. “It’s been a miracle for me, but I want people to know that you can make it through this. If you have a great support group like I do, my husband, my children, my church, my friends, you can fight this thing. You don’t have to give up. Your attitude is so important.” 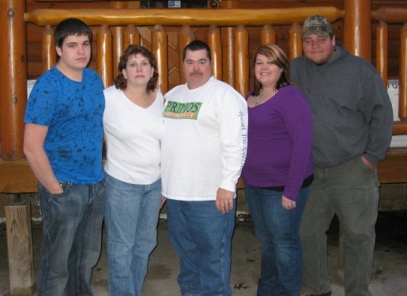 The road never has been easy. The chemo made her so sick she begged to stop. The pain killers became addictive. Her hair fell out in clumps.

She lost weight, gained weight and lost it again. Her health now is a battle, yet nothing she can’t manage.

She has days when she feels rotten, and days when she feels just fine, but she hardly lets anyone else know the difference. Her outlook has remained steady, focused on others, worried more about her family than herself, offering help to other cancer patients, even at the expense of her own well being.

“This (cancer) has been like a roller-coaster ride,” she said. “You can get through it. You just have to hang on real tight.”

She grows tired of the regular scans and the blood tests and the uncertainty that always follows each one. Side effects of the medications aren’t pleasant, either. Pain management can be tricky at times, but her attitude pushes her through each day.

“I’m still busy, always trying to go 90 miles an hour. A bunch of us are going to a (Atlanta) Braves game this week,” she said. “And I still like Mexican restaurants more than I should. I refuse to let this get me down.”

She proudly watched her son George graduate from high school and join the Marine Corps. Her baby became a man.

She cried watching her daughter Jackie go off to prom. She cried again when Jackie recently married.

They were things she never expected to see. Not after she was told 12 years ago her future was bleak.

“I approach each day like it could be my last. I don’t wait around,” she said. “Sometimes the uncertainty of it all bothers you — and it’s never far away — but you can’t worry over things you can’t control.”

Exposed to Asbestos as a Child

Tammy had no control over the asbestos exposure that likely caused her mesothelioma at such a young age. She still isn’t sure how it happened.

It could have been the summer in high school that she spent with her godparents, sleeping on a cot in the laundry room. He godfather worked as a chemist for Union Carbide, where there was plenty of asbestos that he brought home on his clothes.

“It’s like looking for a needle in a haystack,” she said. “Not sure you can say with certainty where it came from. I just know I got sick. And I’m mad at those companies that knew asbestos was making people sick.”

Tammy originally was told she might have an ovarian cyst that was causing her abdominal pain. But the surgery uncovered a much more serious problem.

“My organs were all stuck together,” as she described it. “It was a mess inside.”

The diagnosis didn’t come immediately. Twelve years ago, there weren’t many doctors who recognized peritoneal mesothelioma, which still is a rare type of cancer. They only knew it was bad. When she finally got her definitive diagnosis, she met it with the same way she does everything now — full-speed ahead.

Her children are grown now and living elsewhere, so she often volunteers as a nanny, watching a pair of 12-year-old twins after school each day for a friend who lives nearby. They are about the same age her children were when she was diagnosed.

“I didn’t know if I’d be around to see my own children grow up,” she said. “I was blessed. And now I get to enjoy it again. I want to see these two grow up, too.”

Were you inspired by Tammy’s story? Would you like to share your mesothelioma experience with the community? Let us know in the comments below, on Facebook, or at outreach@asbestos.com.