There will be no victory parade, no anniversary celebration, not even a luncheon or commemorative plaque to honor pleural mesothelioma patient Robin Brown in November.

But there should be.

Brown is a 64-year-old beacon of hope and an inspiration to the entire mesothelioma community, still going strong with her low-key approach as she reaches the rarely-achieved, 10-year survival milestone next month.

She will mark the occasion in her typical, unpretentious fashion: Driving the same 12 miles to work as she always does in her Subaru. At the end of the day, she will return home to her condominium in Denver, where she lives with her dog Darby.

Giving the Grandchildren a Hug

Her idea of celebrating will be stopping off at her daughter’s home, giving her grandchildren, Kohen and Keen, a bigger-than-usual hug, and thanking them for being her inspiration while battling this rare and insidious cancer. 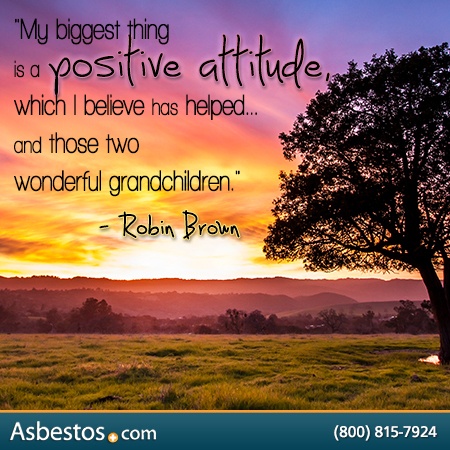 “I don’t really discuss it [mesothelioma] much. I won’t make a big deal of it, either. I don’t want people always wondering, always asking me how I feel,” Brown said from her home one recent evening after work. “It’s not something I want to dwell on or use as a crutch. It’s just life. You go for as long as you can.”

Less than 5 percent of all pleural mesothelioma patients survive for 10 years after being diagnosed, which often reminds her just how fortunate she is. It also is a glowing reminder that survivors can beat the odds.

“I’ve been really lucky, that’s for sure,” she said. “My prognosis originally was not good, but for whatever reason, mine has been slow growing. My biggest thing is a positive attitude, which I believe has helped, and those two wonderful grandchildren. They mean everything to me now.”

Brown moved to Denver in 2008 to be close to her only daughter, shortly after her husband died and just before the birth of her oldest grandchild.

She had spent much of her life in Indiana, where she was first diagnosed with mesothelioma in 2004. Brown had aggressive surgery that removed a third of her lung and the entire lining around it. The multimodal treatment approach included chemotherapy and radiation, and it worked well.

She underwent chemotherapy again in 2008, 2011 and 2013, returning each time the cancer started to grow back. It came back even earlier this time, causing problems with her esophagus.

“It’s getting harder to hold it off, and it has come back quicker each time,” she said. “I didn’t think I was going to make it through chemotherapy the last time in 2013. This year, I just did the radiation treatment, and my last scan looked good. We’ll see what happens.”

Brown continues working as an insurance auditor at a Denver-area health center. She has worked almost all of her adult life. There are days now when she feels bad. Days that would make most people stay home. But she fights through the problems and drives to work.

“I don’t call in sick very often. People will say, ‘Why don’t you stay home?’ But what would I do, except lie in bed thinking about how bad I feel? Work is good for me,” she said. “People will look at me, and they can see I don’t feel well. They don’t have to ask. And I don’t complain. I get through it.”

Seeing the Positive Side of Chemotherapy

Chemotherapy treatments are what caused her hearing loss, requiring two hearing aids today. It damaged her kidneys and gave her migraine headaches. Chemotherapy also caused the dehydration that caused her to faint when she was driving home one day, crashing into a guard rail before she awakened.

The altitude in Denver gives her problem, too; she sleeps with oxygen sometimes, but there is nowhere else she wants to be. She still loves watching the grandkids play. One of her happiest moments was in the swimming pool last summer with the oldest one.

She plans to work another two years before she retires. She needs the health insurance the job provides. If more chemotherapy is necessary, she will do it again. She looks at the good that chemotherapy does — fighting off the cancer — not the harm that it also can cause to her body.

“I want to see those two kids grow up,” she said. “Moving to Denver was the best thing I ever did. I have no time for negative people or negative thoughts. I’m not ready to stop by any stretch.”