Update: Brian’s family informed us that Brian lost his battle with mesothelioma on Aug. 2, 2015. He was 54. His family hopes his story will inspire others.

Brian H. had so many people praying for him that even God must have been impressed.

His pleural mesothelioma cancer is gone. At least for now.

Brian passed the one-year survival mark in March with another clean scan, crediting the treatment he received and the power of the faith that has grown stronger with each day.

“I’ve been blessed. You could see the divine intervention through this whole process, one thing after another,” Brian said from his home in Memphis. “I’ve had some unbelievable support from so many places, everyone praying for me. This disease is tough, both mentally and physically, but I really think God is going to carry me through.”

Prayers that started with his immediate family, his wife, Nina, and their two daughters, quickly moved to dozens of relatives. The congregation at his Baptist Church started praying, too, and so did everyone at the Methodist Church across the street. Those at the nearby Catholic Church also joined in.

The flood of support left him both humbled, and in awe.

“I was in a local Walmart a month or two after I was diagnosed, and a man walked past me whom I had never met or seen before, and he says, ‘we’re all praying for you.’ Things like that stick with you,” Brian said. “I work with a young guy from India, and he talked about starting a prayer chain for me there. So yes, I believe in the power of prayer.”

Brian, 54, was floored by his original diagnosis of malignant pleural mesothelioma in March 2014. He had been undergoing various tests and procedures for almost a year as doctors searched for answers and kept draining fluid from around his lungs.

“I was stunned, shocked when they told me. It was scary, real scary. I didn’t even want to ask how long I had to live,” he said. “But I wondered. I started thinking about all the things that I was going to miss.”

Pleural mesothelioma typically comes with a prognosis of 6-12 months. The standard multidisciplinary approach to treatment can extend the survival time but not by much. 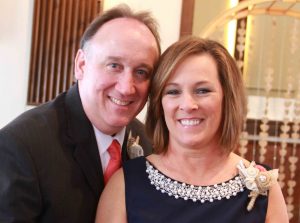 Walking Both Daughters Down the Aisle

His oldest daughter, Brandi, was married a month after his diagnosis and surgery, and he was there to walk her down the aisle in a traditional church wedding. Attendees, though, did a double take when they saw him walking younger sister, Kelsey, down the aisle first, thinking he had made a mistake.

“I told my wife I was worried that I wouldn’t be around to ever walk my youngest down the aisle, and this might be my last chance, so it meant a lot to me to walk them both that day,” he said. “Yes, I was scared.”

As support and prayers poured in, his fear eroded. Brian returned to work as an analyst for a major corporation based in Memphis. He started eight weeks of chemotherapy. And after consulting with numerous doctors, he and Nina went to New York for a six-week innovative radiation treatment plan at Memorial Sloan Kettering Hospital.

Almost by accident, they ended up living in a small apartment at the St. James Episcopal Church in New York, which included a congregation that also began praying for his family.

Brian’s family had never met or spoken to anyone at the church before walking in that first day, but they were treated like family. And they still are today. They often are invited to dine with members of the congregation.

In fact, the whole church recently celebrated the news that Brian was cancer-free.

While in New York last fall, it was one good thing after another during those six weeks of radiation treatment. Brian and Nina, both sports fans, were invited to watch the iconic Derek Jeter in his next-to-last baseball game at Yankee Stadium.

They were given tickets to see famed quarterback Peyton Manning and his Denver Broncos play against the New York Jets.

The family turned a very difficult period of treatment into a very positive time in their lives.

“We have met many great, wonderful people through this,” Brian said. “I really feel like ‘My Cup Runneth Over.'”

Brian has resumed much of his pre-cancer routine. His work week is back to normal, although he works from home two days each week. His pace has slowed a step, but it remains steady. He has returned to the baseball field, where he helps his brother’s Little League team. Husband and wife are both very involved in their church.

“So much support made me realize I wasn’t alone in this fight. And that’s important. This is a path you don’t want to try and walk alone. You have to let others into your life,” he said. “I’ve tried to stay busy, too. It keeps me focused, and it keeps me from worrying. I’m praying it [mesothelioma] doesn’t come back.”

His younger daughter is transferring from an out-of-state college to the University of Memphis to be closer to home, a move that Brian initially discouraged. He didn’t want his diagnosis to change anyone else’s routine, even though it has touched so many.

He has volunteered his time to speak with newly diagnosed mesothelioma patients, offering his support to help guide them through the process.

“My daughter, a softball player, has this phrase she uses all the time: ‘I Got This.’ Well, when we first talked about this disease, I told her ‘Don’t worry. I Got This,'” Brian recalled. “She paused and said to me, ‘No dad, God’s Got This One.’ She was right.”