David Doust is a well-known and respected figure at the Mandurah Seniors and Community Centre, located about an hour south of Perth, Western Australia.

Each Monday, he travels roughly 30 miles to Waroona, where he participates in and helps to organize an exercise class for people with mobility problems.

From Tuesday through Friday on most weeks, you will find him taking part in hour-long exercise classes or taking a 5-mile trip with other walkers around the town.

This amount of exercise for anyone in their 70s is quite remarkable. But for Doust, 74, a mesothelioma survivor, it is amazing.

Doust’s journey with the asbestos-related cancer began in early 2016 when he experienced shortness of breath, or dyspenea. Wrongly diagnosed with pneumonia, he underwent a pleurodesis to remove excess fluid from around the lungs and was soon back to his exercise routine.

His love of sport and competition also saw him taking part in several marathons, including the City2Surf event in Sydney, where he again experienced persistent dyspnea.

The fluid had returned.

Upon returning to Perth, he underwent another pleurodesis. This time the fluid was sent to pathology.

Doust will never forget the day his lung specialist called to inform him he had acute lymphatic leukemia and pleural mesothelioma — both attributed to his history of asbestos exposure.

Although deeply shocked by the double blow to his health, Doust had no doubt his time spent in the asbestos mining town of Wittenoom was the cause.

Where It All Began

The realization came with regret. While living in the town, Doust was aware of mesothelioma, but had not feared for his health.

He knew a good number of people who lived in the town for many years without illness, including a friend who resided there for more than 50 years and was perfectly healthy.

Additionally, he believed his nonsmoking habit and healthy lifestyle made him immune. It was sad to accept the town he loved so much had turned out to be his enemy.

Wittenoom, the small town situated approximately 870 miles northeast of Perth in the Pilbara region of Western Australia, was a mining stronghold for more than two decades. At one point, it was the only place in the country mining blue asbestos.

The operation was shut down in 1966 following the emergence of serious health risks, but another decade passed before authorities realized the blue dust spread throughout the town was potentially deadly.

In 2008, the government declared the town a contaminated site.

Doust moved to Wittenoom in 1977 to work as postmaster — the last official postmaster of the now-infamous town — a position he held for three years before transferring to Paraburdoo and later to Donnybrook in the south of the state.

Retiring from the postal service in 1985, he returned to Wittenoom — this time to stay. After a few months working in the local garage, Doust opened his own business, Dave’s Gorge Adventure Tours, offering a range of guided tours into the Karijini National Park and surrounding gorges.

A lover of physical exercise, Doust relished the opportunity to keep fit while sharing his love of the area with the multitude of tourists that came to the town.

It wasn’t long before he earned the reputation as the best guide in the area. Affectionately known as “Spider-Man” because of his agility climbing cliffs, Doust ran his business for 13 years.

He could not have been happier.

Doust reluctantly closed his business and relocated to Perth after escalating concerns for public health saw the government begin preventing tourists from entering the town.

In 2014, he was one of the oldest Australians to walk the Kokoda Track, a 60-mile hiking trail.

Since his mesothelioma diagnosis, Doust has undergone two rounds of chemotherapy, both resulting in a mini stroke that left him hospitalized.

But even that wouldn’t hold him down.

Within weeks, Doust was back at the senior center taking part in exercises classes and enjoying other activities with his friends, who pray for him and offer support whenever needed.

Doust is quick to admit he couldn’t do it without them.

He is also grateful for the many services provided by the center, including a variety of healthy meals that come from the fully staffed kitchen. Never married, he lives alone and has no interest in cooking. Most days he eats a hearty lunch at the center and a simple bowl of soup — often provided by caring friends — at home later in the evening.

Fortunate to suffer no pain, Doust carries on in much the same way he always has. Mesothelioma has not changed his enthusiasm for life or his willingness to help others.

This year, like many before, he travelled to Chang Mai in Northern Thailand to an elephant nature park, run by the Save Elephant Foundation, a nonprofit organization dedicated to providing care and assistance to Thailand’s captive elephant population. 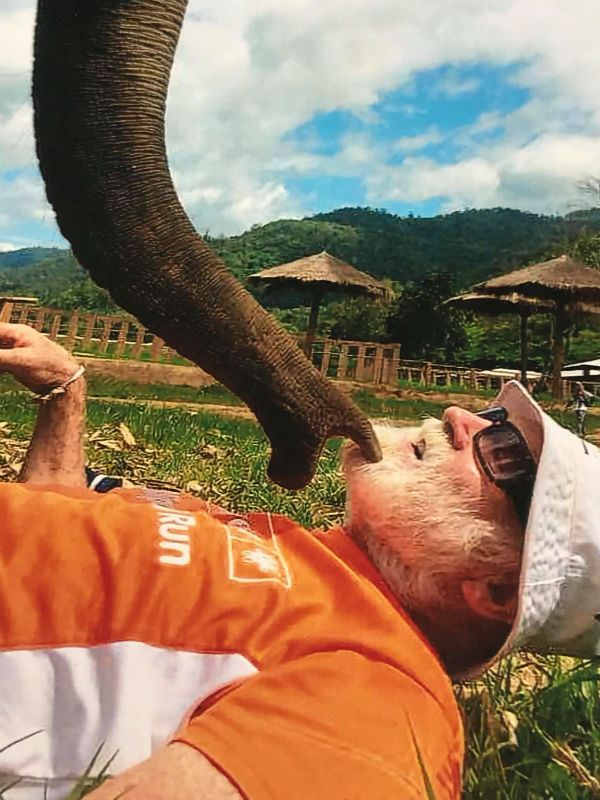 David Doust regularly travels to Northern Thailand to volunteer for the Save Elephant Foundation.

Here, along with fellow volunteers, he helps to care for the elephants. His chores vary, sometimes menial but never boring.

The opportunity to gain the trust of the majestic animals brings such joy it transcends all thoughts of illness, and it gives a sense of wonder that remains long after he returns to Australia.

For Doust, the only medicine he needs is good friends, plenty of exercise and a positive attitude.

“Try to do the things you would normally do,” he said. “Be active, and above all, keep up your friendships.”