Wayne N. knows exactly what caused the mesothelioma cancer that pushed him into an earlier-than-planned retirement as a union electrician in Cincinnati, Ohio.

He also knows what stopped it from killing him.

Asbestos was the culprit. Cherries were the cure.

Yes, cherries, the red tart cherries that are grown in Michigan, the ones he always has in his freezer at home, and the ones he has eaten every single night of his life for the last 20 years.

“There is something almost magical in those cherries,” he told Asbestos.com matter-of-factly. “I don’t know what the science is, but I’m a real believer. I’m proof that they work. I don’t exactly know how or why, but they do. I know they can stop cancer, and a lot of other things, too.” His last name is being withheld over privacy concerns.

Wayne, 83,  is convinced the cherries have kept him healthy, prevented the cancer from spreading like it usually does, allowed him to grow old and outlive 99 percent of other mesothelioma patients.

He was first diagnosed in 1991. The terrible news was confirmed by three doctors, two of them cancer  specialists who gave him the typical get-your-life-in-order, let’s-get-treatment-started-quickly advice.

It was the last time he saw those specialists.

“I generally stay away from doctors. Just don’t like them,” he said. “They aren’t going to tell you about cherries because there is no money in it for them or for the drug companies. I’ve seen too many other people listening to doctors, who give them treatments that just don’t work. The cherries work.”

Wayne started eating his cherries while helping his wife battle lung cancer in a more traditional way. She was a lifelong smoker who died at age 60. He would drive her to the hospital for day-long treatment sessions of chemotherapy and radiation and see no positive results.

“With all those treatments, she never improved one little bit,” he said. “The problem is that so many of these medicines being prescribed don’t work. Maybe chemotherapy works for breast cancer, but it didn’t help my wife at all. I just stay away from doctors now.”

Wayne believes that the best way to fight disease is the natural way, by strengthening his immune system through nutrition and diet and exercise. He takes vitamins. He eats plenty of fruits, vegetables and nuts. He works in his yard every day. And he pulls exactly nine red tart cherries out of his freezer to eat every night.

He used to eat more, but he started getting nosebleeds from the way they thinned his blood so much. The shortness of breath, which was one of the symptoms that led to his original doctor visit two decades ago, has not been a problem for years. 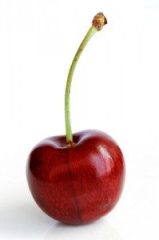 Wayne’s cherries, like many fruits and vegetables, have been known as a tasty, healthy snack for a long time. More recent studies have shown just how rich they are in antioxidants like melatonin, which has been proven to help sleep patterns.

Melatonin also has been linked to reducing inflammation and to fight free radicals in the body that are linked to cancer risk. There also are studies that show melatonin can help delay the aging process. There are many older people who believe that increasing melatonin can help relieve arthritis and gout.

“It was always anecdotal, but it’s been reported so frequently, by so many different people, that you have to think there may be something to it,” said Dr. Russell Reiter, professor of neuroendocrinology at the University of Texas Health Science Center, who has published several papers on melatonin. “The combination of antioxidants in cherries can be very beneficial.”

Spreading the Word about Cherries

Despite the skepticism over his belief that the tart cherries prevented mesothelioma from killing him, Wayne is eager to spread the word. He said it helped his sister fight off cancer not long after his wife had died. He said his cherries were the key to a good friend’s victory over colon cancer. They relieved the gout symptoms another friend had. He said his cherries even were responsible for helping the woman who had been cutting his hair.”

“She and her husband had spent many years, and thousands of dollars, going to all sorts of fertility clinics, trying everything, to have a baby,” he said. “Nothing had worked, and she was so disappointed. Then I gave her a bag a cherries. And within a few months, she was pregnant, and so thankful.”

Wayne’s asbestos exposure had come over a 35-year career as an electrician, much of it involving insulation material. The latency period after exposure can be anywhere from 10-50 years. A good friend and fellow union member he worked close with died from mesothelioma a few years ago.

Both of them were part of a lawsuit filed against a variety of asbestos manufacturers that still are paying out damages. Wayne gets a check periodically, while his friend’s check are going to his widow.

“My father is a big believer that nutrition is everything,” said daughter Cindy, who lives near her father. “I don’t think the doctors believe this kind of thing, but he doesn’t believe in doctors. He just wants to help other people. He doesn’t see well anymore, but he never, ever gets sick. Anytime I get sick, he’ll say, ‘Have you been eating your cherries?’ “