‘Mesothelioma Warrior’ Refuses to Back Down

Instead of focusing on the prognosis or worst case scenario, she thoroughly researched the rare cancer. She was determined to beat it.

By the time doctors diagnosed her with peritoneal mesothelioma in March 2013, Goodson had already survived non-Hodgkin lymphoma. CT scans from that cancer eventually led to her mesothelioma diagnosis.

“I wasn’t afraid this time,” the four-year peritoneal mesothelioma survivor told Asbestos.com. “It made me realize that life is precious. It’s so precious.”

Goodson, 62, now proudly displays a tattoo of the Native American symbol for the phoenix on her lower back. Under the tattoo is a single, powerful word: “Warrior.“

Prior to her non-Hodgkin lymphoma diagnosis, Goodson lived a healthy life.

Doctors removed the 10-centimeter tumor on her left leg. A postoperative CT scan revealed several spots around her bladder.

“I called them the mystery spots,” Goodson said. “My doctors thought the non-Hodgkin’s had metastasized and was going there,” she said.

Six rounds of chemotherapy later — or “poison parties” as Goodson calls them — the spots remained.

“They wanted me to do two more because those spots were still there,” she said. “They weren’t any bigger, and they weren’t any smaller. They didn’t understand. I said no. I said I signed up for six, and six is my limit.”

Next came radiation treatments — 25 rounds of it. Nothing changed.

“They said we need to take a biopsy because something’s not right,” Goodson recalled. “At that point, I just didn’t want to hear anymore.”

It took some convincing, but Goodson had another scan and a needle-point biopsy. The result: Peritoneal mesothelioma, an incurable cancer that develops in the protective lining of the abdomen.

“I was kind of calm about everything, but I knew this was big,” she said. “I Googled it, and I just started researching.”

Goodson’s doctors directed her to the Moffitt Cancer Center in Tampa. She first met with Dr. Jacques Fontaine, a well-known thoracic surgeon and mesothelioma cancer specialist.

“We were talking, and I told him ‘I read about you and not to take this personal, but you’re thoracic, and I’m peritoneal,’” she said. “He was impressed and a little shocked I knew so much about my cancer.”

“She told me I have five years to live,” Goodson recalled. “She said I had options.”

One of those options was cytoreductive surgery, which removes as much cancerous growth as possible from the abdomen.

Dessureault completely removed Goodson’s abdominal lining, known as the peritoneum, along with three tumors around her bladder.

“I was caught at a really good time,” Goodson said, noting how the rounds of chemotherapy and radiation from the lymphoma likely inhibited growth of the mesothelioma cancer. “Medically, I’m blessed.”

“We call it ‘shake and bake,’” she said. “They heat the chemo; they pour it in there [the abdomen]; and they rock you. After your surgery, they can rock you for like eight hours.”

Before her surgery at Moffitt, Goodson had all her paperwork in order.

She found a power of attorney in her friend Patsy Craft, a licensed practical nurse. Craft provided the guidance and support Goodson needed to navigate the complicated medical process.

They went to Moffitt together and later had a meeting, discussing everything that was going to be involved.

“I said ‘I don’t want to burden you. Are you in or are you out?’ And she said, ‘I’m in,’ and from that point forward, she’s been with me all the way,” Goodson said of Craft. “She’s always checking on me, offering to go on appointments and always calling me after to see how they went.”

Goodson’s longtime friend and neighbor Polly Ball also helped her along the way.

“Those two have been my rocks,” she said. “They’ve been phenomenal.”

Goodson lost her father in 2012 when she was battling the lymphoma. Her parents didn’t know about her health issues. She didn’t want to worry them.

“My dad went pretty quickly, but I got to see him before he passed away. But I didn’t have any hair. I went with a do-rag on,” she said. “I told my mom I got a virus at work, and the doctor gave me some medicine, and all my hair fell out. And she believed it.”

With Goodson’s sister living a thousand miles away in Pittsburgh, Craft and Ball have been the pillars of support she needed during her second bout with cancer.

“Everybody needs support, because it’s scary,” she said.

A Newfound Appreciation of Life

Work was Goodson’s life. She spent 20 years working as a chef for senior citizens, along with two decades of bartending.

The non-Hodgkin lymphoma and mesothelioma cancer put her out of work for two years. As soon as she could, it was back to the grind. 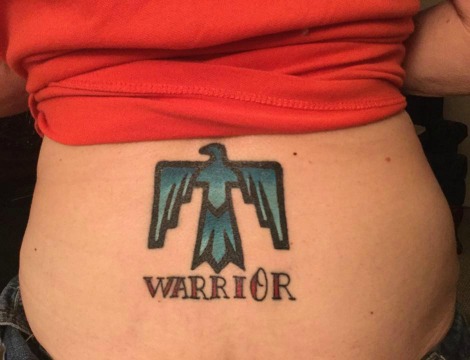 Mesothelioma survivor Judy Goodson shows off her tattoo of a phoenix with the word “Warrior” underneath.

Goodson’s first job after recovery was making pancakes and coffee for 500 people at a 4-H camp.

She’s spent the past few years working as a Wal-Mart food demonstrator, showing customers how to cook and jazz up meals.

“It’s a very creative thing and a good field for me to be in,” she said.

Goodson is more conscious of what she eats now and tries to work out when she can. There are still preventative checkups and scans to make sure the cancer stays in remission, but overall, her life is back to normal.

She does have a new appreciation for life and approaches every day with the same warrior mentality that powered her through surgery and recovery.

“Mesothelioma might have thought that it had me, but I didn’t have it,” she said.