Aggressive surgery that removed a lung and major parts of his diaphragm 15 years ago eliminated the cancer that hasn’t returned.

His problem is the residual pain that never subsides and the growing unavailability of the pain medication that once held it in check, allowing him to thrive as a shining, post-surgery success story.

Those days have ended.

Crisler, 61, still lives in Kennesaw, Georgia, but his Harley Davidson Wide Glide motorcycle he rode so defiantly across the country five years ago just sits in the carport collecting pollen and dust.

The roar is no more. The trips to party in Key West, Florida — and every place in between — don’t happen anymore.

Just five minutes on the bike leaves him wincing in pain.

“I have absolutely no issues with mesothelioma cancer today. That hasn’t touched me in a long time,” he told Asbestos.com. “I’m sure I’ll eventually die of something else. But it’s Johnny law that took my bike, my life, away. The feds, or the CDC, whoever, is pressuring the doctors from providing the pain meds that allowed me to live somewhat normally.”

But these stricter regulations leave Crisler and many other cancer patients with nowhere to turn.

Doctors everywhere are facing increased scrutiny over the amount and types of pain medications they prescribe, which is hurting those who need it the most.

“My doctor said it’s like throwing the baby out with the bath water. If this continues, dark days are coming for people with chronic pain. You’re going to see more and more mesothelioma patients, dying cancer patients, not getting the pain relief they need,” Crisler said. “This is becoming a huge problem that people don’t want to talk about.”

Crisler said he was managing reasonably well for years with the drug fentanyl, a powerful synthetic opioid which is a safe, surgical anesthetic when carefully monitored.

Unfortunately, fentanyl became a popular recreational drug often mixed with heroin that caused too many overdose deaths, leading to much tighter restrictions of its use.

“I understand where they are coming from. I’ve seen serious drug abuse. It’s hell to go through. It’s not right for kids to get addicted to it,” he said. “But the regulations have just gone overboard today. Everyone is different. Everyone has different pain levels. Fifteen years and I never had a serious problem with it, except it cost too much.”

EPP Surgery and Prayer Worked for Him

Crisler has become an exception in more ways than one. Rarely does anyone diagnosed with pleural mesothelioma live more than five years, even with the best multidisciplinary treatment regimen.

He remains a living testament to the effectiveness of the extrapleural pneumonectomy (EPP) — the most aggressive surgery a mesothelioma patient can undergo. In a 12-hour procedure at Brigham and Women’s Hospital in Boston, surgeons removed one lung, the lining around his heart and lungs, and parts of his diaphragm.

“They gutted me like a catfish,” he said. “The cancer never returned, but my pain today is a byproduct of that surgery.”

Crisler also credits the power of prayer and a God-given miracle. On the eve of his surgery, family and friends held a prayer vigil in his backyard that was attended by more than 60 people.

“God healed me. I’m sure of that,” he said. “I think my faith has had a lot to do with this. When I think back over my life, this wasn’t the first miracle for me.”

Crisler, still a free-spirited rebel, is no stranger to living life on the edge. He has had more than one serious car wreck. He was once nearly shot in the face from point-blank range after an argument turned violent.

He admittedly drank and smoked too much in his younger days.

Crisler was chased by police as a youngster on his first bike after defiantly tearing through a nearby school yard.

“I know the difference between right and wrong, but I’ve always been one to flirt with the law,” he said. “God is keeping me around for some reason. But it’s not because I lived this great, honorable life. I’ve raised some hell in my day.”

Crisler Lived to See His Grandchildren

Since his EPP in 2002, Crisler has had his share of complications.

He lived through emergency open-heart surgery a decade ago related to complications from his EPP surgery. He also has been through serious pulmonary issues with his remaining lung.

Yet he has survived and thrived, living longer than anyone thought possible, long enough to spend all his asbestos liability settlement money. 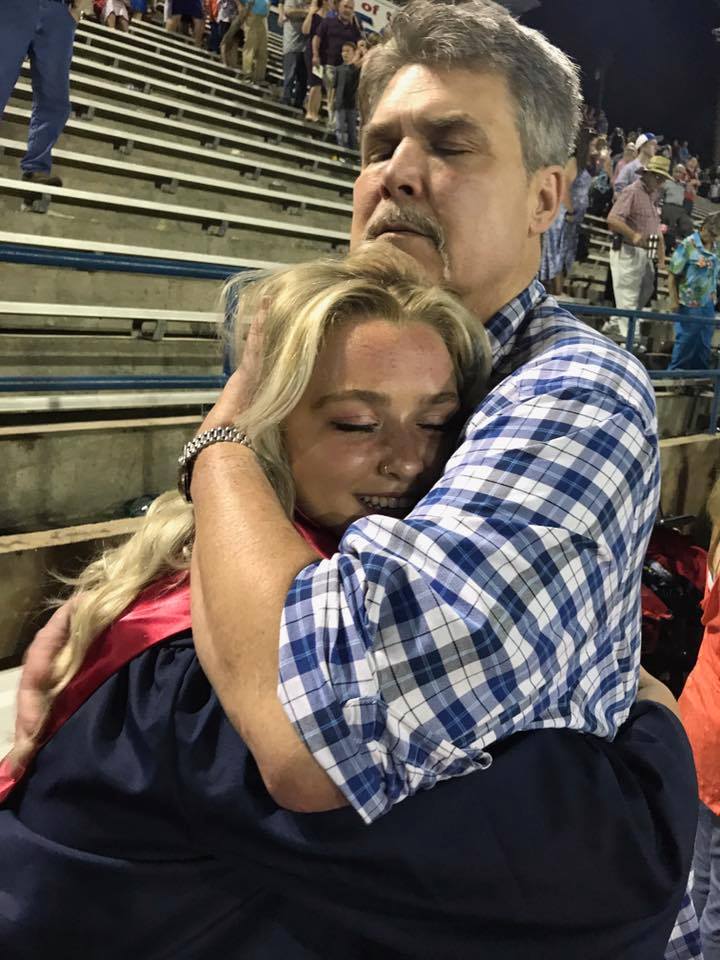 Tim Crisler with his daughter, Savanna.

“I went from never looking at the price on a menu to never eating out now because I can’t afford it,” he said. “The narcotics cost a fortune.”

Crisler loves doting on his three grandchildren. He lives now with his 84-year-old mother in the home where he grew up.

They take care of each other.

“My pain now really limits what I can do,” he said. “I hate not being able to ride anymore. That kills me. I don’t do much. The fentanyl used to let me do things. I can’t do those things anymore.”