Mark Martin has been racing motorcycles for the last 47 years.

He sees no reason to stop now.

Martin, 58, is a mesothelioma survivor who plans to race this spring at Nelson Ledges Road Course in Garrettsville, Ohio, at least for one last fling.

“It’s not something you can just walk away from,” Martin said from his home in Malvern, Ohio. “If I’m physically able — and I expect to be — I’ll be back out there again. I’m not done just yet.”

Martin, who was diagnosed with peritoneal mesothelioma more than three years ago, has endured two major cytoreductive surgeries to his abdomen.

His first was followed by a debilitating chemotherapy regimen that weakened him considerably. New tumor growth was discovered a year later.

After his second surgery in October 2016 at the Cleveland Clinic, he declined the follow-up chemotherapy and instead embarked on his own alternative medicine regimen.

“I’m like my own doctor now, basically curing myself,” he said. “I just listen to what my body is telling me.”

He buys mostly organic and eats healthier than most everyone else, cutting out meat and all processed food. He monitors his diabetes closely, too.

And he feels great today.

“My overall health has improved considerably,” he said. “I’ve never been high on Western medicine and prescription drugs. Healthy living, and a healthy lifestyle, can go a long way. I’m sure that has helped me attack this cancer.”

And so has riding one of the many motorcycles he has parked in his garage. He has street bikes, road racing bikes, even an old dirt bike.

Martin rides one of his bikes almost daily, often with his wife Cecelia on the back. Their regular rides “around the block” often go for 50 to 60 miles, mostly on country roads before returning home.

“In my mind, there is no freedom like the freedom I get from riding motorcycles,” he said. “That’s never changed for me.” 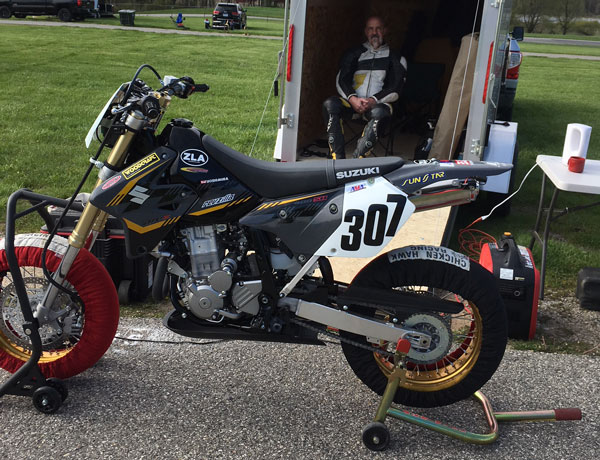 Mesothelioma survivor Mark Martin with one of his motorcycles at the track.

A Family That Rides

Martin has ridden since he was 11 years old. He has owned an estimated 100 different bikes in his lifetime.

Both his daughters — a neonatal nurse and a trauma center nurse — raced motorcycles competitively when they were younger, learning all the tricks from their father.

His youngest daughter flirted with a career as a professional road racer before going into health care.

Martin, in his heyday, raced regularly throughout the East Coast. Most of his serious injuries, though, came from riding his street bikes.

Through the years, he has broken a leg, a hip, an arm and a few ribs. He walks today with a pronounced limp, a reminder that his lifetime passion comes with risks. The scars on his abdomen remind him of what could be brewing inside.

“I’ve had my ups and downs through the years. I remember telling someone that this mesothelioma was just another bump in the road for me,” he said. “My road has been filled with potholes, but I’ve been lucky enough to have a good suspension.”

Martin nearly gave it all up when his cancer returned in 2016.

He was single at the time. His daughters were grown and doing well on their own. Doctors told him he had nine months to live.

Martin considered bypassing the second surgery, buying a motor home to tour the country with his bike in tow, ending all treatment to live on his terms.

Fortunately, he had just met Cecelia, the new love of his life.

She gave him hope and a reason to live. She endorsed the herbal, healthy lifestyle he wanted to try. She rarely left the hospital after his surgery, sleeping in the recliner next to his bed.

He adores her. She loves everything about him, especially his optimistic nature.

“If it wasn’t for her, I’d be dead today,” Martin said. “I don’t know if I would have given up [without her], but I would not have had this intense desire, and a reason, to keep fighting. So I went through another surgery. She’s the best.”

Inspiring Others with His Life

The couple bought a home together earlier this year in a picturesque, lakefront community where he always wanted to live.

Martin has spent much of his time doing fix-up and remodeling work on that home.

“I tell people, if I sat down and listed all the things, the traits, I would want in a woman, she exceeds them all,” he said. “Everything about her is amazing. Right now, I’m living my dream.”

By 2019, he is hoping to be back on the Nelson Ledges track he always considered a second home. He raced there dozens of times. His daughters learned to race there.

As the son of a small-town minister who gave others hope, Martin has followed his father’s lead in helping others.

“I want to show people that you can do whatever you set your mind to doing. I’ve always tried to be an inspiration to others,” he said. “If people see this old, gimpy guy with a limp overcoming what I’ve been through, it might help others get through their problems, too. And I’d like that.”