Army Colonel Aims to Help Others by Surviving Mesothelioma

Tim Povtak
Fact Checked
Our fact-checking process begins with a thorough review of all sources to ensure they are high quality. Then we cross-check the facts with original medical or scientific reports published by those sources, or we validate the facts with reputable news organizations, medical and scientific experts and other health experts. Each page includes all sources for full transparency.
Written By: Tim Povtak, Last modified: March 11, 2021 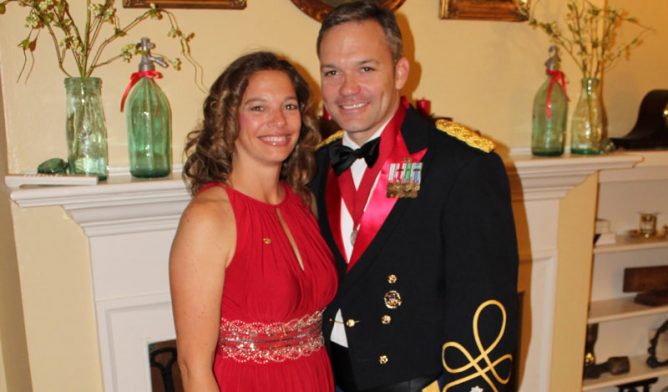 Colonel Doug Thomas believes that his 21-year career in the U.S. Army has prepared him well for the fight of his life.

Malignant pleural mesothelioma, an aggressive cancer with no definitive cure, may have met its match.

He returned to his post in early September — proudly back in uniform — less than 12 weeks after aggressive pleurectomy and decortication surgery.

The procedure included a reconstructed diaphragm, four chest tubes and a 10-day follow-up hospitalization after an infection developed.

“I remember looking at my uniform the day after I was diagnosed, and saying, ‘I don’t know if I’ll ever get to wear this again,’” Thomas told The Mesothelioma Center at Asbestos.com. “But here I am, I’m wearing it again. And I’m feeling good.”

Thomas is in the midst of his second round of chemotherapy.

Opportunity to Inspire Others

Thomas is quickly becoming an inspirational figure for mesothelioma patients everywhere, and military personnel, particularly those who have served and thrived under his leadership.

In this fight, he will practice what he has preached to his troops for years, hoping to inspire others battling cancer.

“This [cancer] isn’t a setback for me. It’s an opportunity — to help others,” he said. “And I’m going to make the most of it. I’ve been given a platform. I don’t think I got this disease because something bad happened. I got this for a reason, and I will take advantage of it.”

Thomas, 45, is considerably younger than the typical pleural mesothelioma patient, who is 20 years or older than him.

Practicing What He Has Taught Others

Thomas has approached this fight with the same six basic principles he has stressed for many years — in the military training others and in his personal life.

1. Be aggressive. He wanted the best possible medical care, and he worked to get it. When the first highly recommended cancer center didn’t return his phone call, he didn’t wait around.

2. Keep it simple. Don’t overcomplicate the situation. He and Ripley came to quick understanding.

Thomas wanted language he understood, and no sugar coating. Just the facts.

“It makes things easier to digest.”

3. Moral courage. Thomas will use spiritual, mental and physical strength to beat this disease, fighting it at every step.

“In the Army, we often talk about doing the hard right over the easy wrong,” he said. “Now, it’s easier to not get up in the morning to take the walk you need. But you do it because it gives you strength.”

4. Attitude. Staying positive isn’t easy with the grim outlook that often accompanies this diagnosis, but he wanted nothing of it.

“Attitude is 90% of everything you do,” he said. “If you have a good attitude, you’re going to be successful.”

5. Have fun. Even in times of despair, at your lowest moment, do not lose your sense of humor.

“I love beer, for example. I really do,” Thomas said. “So, after every single treatment I receive, I always ask, ‘Can I drink beer with this?’”

6. Family. Nothing comes ahead of family.

The Army, he often explains, is bigger than any one individual. It will roll on with or without you.

“But you are one with your family. It’s something you always should remember,” he said. “Family is the most important thing in your decision-making process.”

Thomas’ family today is a major part of the all-important support group surrounding him.

He and wife Tiffany have been married for 21 years. They met in high school. He enrolled in the ROTC Program there so he could afford to join her at Kansas State University.

Both graduated with honors. Thomas joined the U.S. Army.

Daughter Mackenzie is 17. Son Brenden is 14.

There is a sign and slogan in their house today: Home Is Where The Army Sends You. And it’s no exaggeration.

They have lived in Belgium, Germany, Oklahoma, California, Pennsylvania, Kansas and North Carolina.

“We’ve talked pretty deeply about what’s going on,” he said. “But how they deal with it, is how I deal with it. They don’t dwell on it because I don’t. We’re one and the same.”

The support group includes his spiritual advisor — the priest who married him and Tiffany two decades ago — his cancer coach, a close friend in the Army who has had cancer three different times, his mother, a nurse, and Ripley, whom he calls his quarterback.

“Everything medically has to go through Dr. Ripley,” Thomas said. “This may sound selfish, but I’ve enlisted some great people to help me through this. The Army has prepared me well.”

Early in his career, Thomas was deployed to Kosovo, Serbia, as part of a peace-keeping force. As a Captain, he was part of Operation Iraqi Freedom, the United States-led military operation in 2003 that overthrew the government of Saddam Hussein and made the world a safer place.

Thomas has been through a lot in his career, preparing him for this latest battle. He intends to be a long-term mesothelioma survivor.

Back Living His Life

Thomas was initially stunned by the mesothelioma diagnosis he received in May.

He had been in great physical condition, running 7 to 8 miles daily, but a sudden shortness of breath led him to the nearby emergency room, where they suspected pneumonia.

They were wrong as tests later confirmed. Pleural mesothelioma cancer, most often caused by long-before exposure to asbestos, was found.

Chemotherapy treatment will resume later this month, but in the meantime, life will proceed. There is work to be done, soldiers to train.

There is a family to love.

His daughter, now a senior at MacArthur High in nearby Lawton, Oklahoma, will be part of the homecoming court at Thursday night’s football game.

Proudly escorting her onto the field will be Colonel Doug Thomas.

“My mantra now is ‘live for each day,’ he said. “I still have some aches and pains from the surgery, but I get up every morning and enjoy my life. I feel good. I’ve got a lot going for me now.”