The active ingredient in a common Asian spice is being scrutinized closely now for its ability to inhibit the growth of mesothelioma tumor cells, prompting scientists to search for a derivative that can be absorbed easily in the blood stream.

Turmeric is the spice that gives curry its yellow color, but its medicinal value is found in curcumin, the active ingredient long-touted for both its antioxidant and anti-inflammatory properties.

Scientists at the Case Western Reserve University (CWRU) in Ohio and the Georg-Speyer-Haus in Frankfurt, Germany, recently published a study demonstrating how curcumin activates the specific protein that can slow or stop the growth of mesothelioma cells.

“I think this is very significant,” Afshin Dowlati, M.D., professor of medicine at Case Western Reserve University and lead researcher, told Asbestos.com. “I will caution though, that this is all laboratory work, and not on humans yet. But it has shown clearly that it can reduce the cancer growth.”

Clinical Trial Not Far Off

Dowlati predicts the recent work will be utilized in clinical trials involving patients within two years.

The biggest issue now is the stomach doesn’t absorb much of the curcumin when it’s ingested as a spice. Scientists at several sites are exploring the development of a curcumin analog that can be safely absorbed by the body.

“There is a lot more work to do, but this is definitely encouraging,” Dowlati said. “It’s a slow process, but we know what our target is now. We’re moving closer.”

Dowlati is head of the research laboratory at the CWRU School of Medicine that studies the clinical management of thoracic malignancies. Much of the work revolves around lung cancer, which strikes an estimated 200,000 Americans annually.

Mesothelioma, which is caused typically by exposure to asbestos fibers, is diagnosed in only 3,000 Americans annually. There is little research, by comparison, and little funding available for that research. There is no cure for mesothelioma. Limited treatments accentuate advancements in that direction.

Curcumin works through its ability to activate and increase levels of a protein called PIAS3, which is found lacking in tissue samples of patients with mesothelioma. 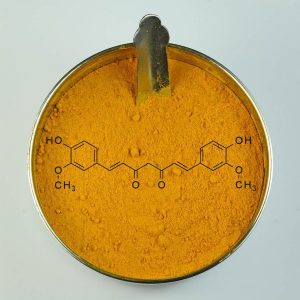 Turmeric with the curcumin molecule formula in the powder.

PIAS3 has the proven ability to stop the growth of another protein, called STAT3, which is a typical pathway that allows cancer cells to grow and overwhelm healthy cells. The lack of PIAS3 opens the door for STAT3 and mesothelioma to flourish.

The latest study also showed that levels of PIAS3 could be used as a predictive marker for mesothelioma, which could lead to more effective therapies. Scientists at other sites are looking for alternatives beyond curcumin to increase intracellular levels of PIAS3.

Researchers at the Karmanos Cancer Center in Detroit conducted an earlier study of curcumin that involved its effect on chemotherapeutic treatments of mesothelioma. The theory was that curcumin could make those cells more vulnerable to chemotherapy.

“It’s important for us as researchers to help find better ways to treat this disease,” Dowlati said. “Our findings beg the question of what role PIAS3 could play in limiting STAT3 activation in other cancers as well. There is an opportunity to extend this discovery.”