The back cover of the recently published 2018 Sports Illustrated Swimsuit issue features a model dressed in a white asbestos abatement worker’s suit layered with a hot pink tiger-striped two-piece swimsuit.

She’s wearing full makeup and a respirator mask. The back cover ad includes the title: “Goddesses of Asbestos Removal.”

The unusual advertisement is the latest contribution in Snickers’ long-running “You’re not you when you’re hungry” campaign.

It is also the most recent example of how deadly asbestos is used as a punch line in popular culture.

“We were tasked with coming up with the yearly Snickers print campaign that runs on Sports Illustrated Swimsuit Issue,” Guimarães wrote. “Our idea was to show how magazine editors have bad ideas when they’re hungry, by creating a brainstorm wall of horrible ideas they had for the theme of the year’s issue. We then brought to life the worst one, in the back cover.”

The advertising executives at BBDO did not immediately respond to a request for comment.

The “worst one” was a model showcasing the hot pink two-piece over the hazmat suit. The tagline of the ad reads “This is what happens when hungry people brainstorm swimsuit issue themes.”

Other fake promos on the ad read: “This year’s sexiest safety equipment” and “These hot newcomers bared it all (Inside polypropylene hazmat suits).”

However, the tongue-in-cheek ad fails to mention the dangers of asbestos, the fact that an estimated 15,000 Americans die each year from asbestos-related diseases such as mesothelioma, and the U.S. has failed to ban the carcinogen. 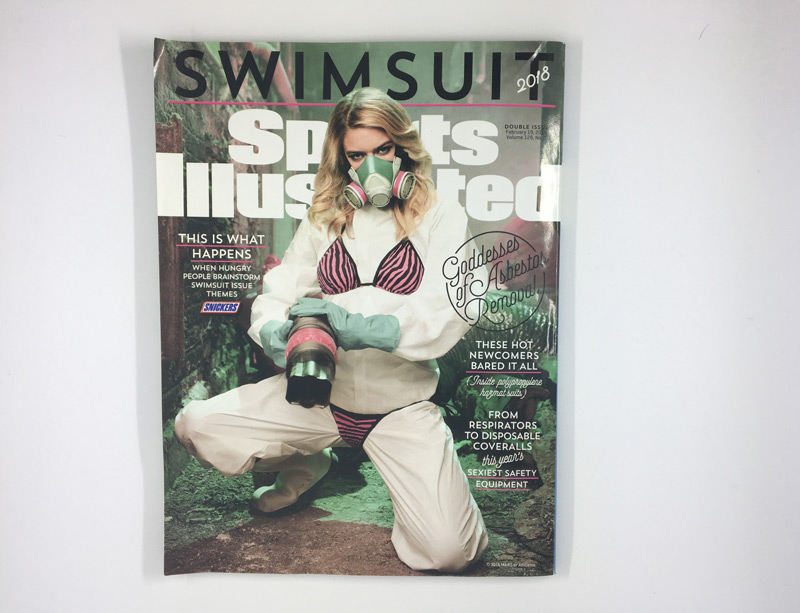 Snickers’ tongue-in-cheek ad on the back cover of the 2018 Sports Illustrated Swimsuit issue features a model in full asbestos removal gear.

The complexity of the ad and what it represents was not lost on cousins and filmmakers Conor B. Lewis and Zack Johnson.

The pair wrote and star in the upcoming independent feature documentary “Dirty Laundry.” The film follows Lewis and Johnson on a bike ride across the U.S. to get a better understanding about mesothelioma — the cancer that took their grandmother’s life.

On the documentary’s Facebook and Instagram pages, the filmmakers said they were conflicted over the Snickers ad.

“Asbestos is a joke – and that’s why we made a movie,” the post reads. “Culturally it’s a joke, BUT it’s also a joke that asbestos is STILL a problem in the United States. Let’s get some new material.”

Lewis went into more detail on Twitter, with a thread directed at Snickers, editors and advertising executives, asking for an open dialog about asbestos’ use in pop culture.

I’m personally conflicted about this. I totally get the joke – I even think it’s funny! (I wish I woulda thought of it!) but I also have sat across from people whose lives have been turned upside down by the crux of this joke, asbestos. https://t.co/erSvBwzj8M

“It’s hard because anytime asbestos is being brought up it’s a good thing – it brings it into the public consciousness,” one Tweet read. “At the end of the day – I want to joke about #asbestos! BUT I also want people to know the true dangers of this material. That’s all,” he continued.

America has a long, complicated history with asbestos.

It once was a manufacturer’s dream, with the ability to fireproof and increase durability of dozens of building products.

The so-called “miracle mineral” was mentioned in a Fred Astaire ballad and was a resource for two Marvel Comics supervillains.

Even after the health issues associated with asbestos became more known, the mineral was still woven into jokes in TV shows and movies.

The Snickers ad is just the latest attempt to use the taboo topic as a selling point — this time for candy bars.

The second part of the 2018 Snickers ad appears on the inside back cover of the SI Swimsuit issue.

It shows a brainstorming wall featuring the other bad ideas they considered.

Themes that didn’t make the cut for the back cover ad include “Active Volcano Vixens,” “Retention Pond Blondes” and “We Got Down at the Burial Ground.”

This marks the fourth consecutive year Snickers has taken over the back cover of the SI Swimsuit issue with a parody. Last year, the brand showcased a bikini-clad antique chest of drawers with cover lines including “Find Out If Salt Water Destroys Mahogany (Spoiler: YES)” and “39 Infuriating Steps to Get a Swimsuit on a Chest of Drawers.” The inside back cover of that issue features a guinea pig in a red bikini.

The latest ad, however, takes on a more serious topic.

The U.S. is one of only a few industrialized countries without a comprehensive ban of asbestos. The chloralkali industry continues to import hundreds of metric tons of asbestos each year.

Statistics from the National Cancer Institute show more than 3,000 people are diagnosed with mesothelioma — a terminal cancer — each year.

Lewis and other advocates realize that while asbestos may be the butt of many jokes, it is the root cause of preventable cancers such as mesothelioma.