She wanted FAITH, a blue-and-red tattoo written in cursive on the inside of her left wrist, where she could find it anytime she needed an emotional lift.

No other word has better summarized and symbolized her life. She and her best friend from Texas got the matching tattoos in August.

As a 10-year survivor of peritoneal mesothelioma cancer, Michelle has discovered just how powerful those five letters can be.

“I do believe that everything happens for a reason. I have faith that God has a plan for me. After everything I’ve been through, it would be impossible to think otherwise,” she told Asbestos.com from her home in New Port Richey, Fla. “At times, I live day-to-day, week-to-week; but I still have faith that things will work out for me. It’s part of who I am.”

Michelle, 54, is a strong-willed, determined woman, a former body builder and a single mother now raising her only child while fighting a cancer with no cure. Her last name is being withheld over privacy concerns.

Daughter Alexandra is 15 today, but she was only 3 when her father left and never returned, and only 5 when her mother was given a stunning diagnosis that changed their path in life forever.

“It wasn’t easy on her, at that age, watching her mother get sick, with no hair on her head from the chemotherapy. She became my caretaker at a very young age,” Michelle said. “We had great friends and family who helped us through, but she had to grow up quickly. I live for her today.”

Asbestos in the Empire State Building

Michelle grew up in New York City, where she once worked in the historic, but aging, Empire State Building. She was there in the mid-’80s, during a major renovation project that often left a thin film of dust on her desk twice each day, never knowing how dangerous it was. It was the same desk where she often ate the lunch she packed and brought from home.

Mesothelioma is caused by the inhalation or ingestion of asbestos, which was a major material in the construction of the famed New York City landmark.

What she originally thought were gynecological health issues 15 years after she left her job, later were diagnosed as peritoneal mesothelioma, a cancer in the lining of the abdomen.

“I almost fell off the table when I was told. It was not like breast cancer or cervical cancer, or something I knew something about,” she said. “I had no idea how long I would live. It was almost surreal. Everything I had heard or read about mesothelioma was bad. I just automatically thought I was going to die young.”

As unlucky as she was — thousands were exposed but only a handful developed mesothelioma — she was fortunate that her diagnosis came earlier than most, before the cancer had spread too far.

Also working in her favor was her relative youth. She was only 44, about 20 years younger than the typical mesothelioma patient. She also was in great physical condition, which allowed her to withstand the six rounds of chemotherapy and radiation treatments.

Four year later, though, after she and Alexandra had moved to Florida, she was back in the cancer ward needing another six rounds of chemotherapy. She was losing her hair once again, but never lost her spirit or her faith. Again, she rebounded surprisingly well, returning to her physical fitness routines.

When Alexandra leaves for school today, Michelle still leaves for the local gym, where she spends three hours each morning. She teaches fitness classes. She does pilates. She lifts weights. She uses the Arc Trainer. She does kick boxing. She runs. She swims. Her immune system never has been stronger. 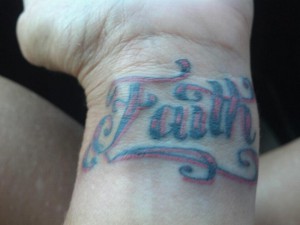 Much younger strangers compliment her on the tone and shape of her body. Her heart rate and blood pressure are excellent. It’s hard to believe there still is this cancer inside of her.

“I really believe my fitness routine has helped. I’m fit. I’m strong. The workouts take away the stress, the worry,” she said. “I think that’s very important. The workouts give me a positive attitude, which I’m sure helps me.”

FAITH isn’t her only body art. There is the butterfly tattoo on the back of her neck. And the purple survivor ribbon and the word cancer on her right arm. 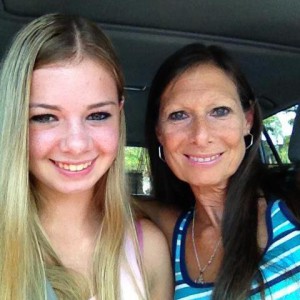 She returns to the oncologist every six months for checkups and scans, a reminder that the future remains unclear. There also is the issue of cognitive impairment, directly related to the chemotherapy. Her hair has grown back — and she proudly wears it long today — but her memory remains garbled. She was once an executive assistant in New York, but today she has trouble remembering how to do simple tasks.

“I used to have a great memory, but I can’t remember things today. I can get lost just driving out of my neighborhood,” she said. “It can be very frustrating. There are times, as my daughter reminds me, that I can’t remember what I said yesterday.”

She is, essentially, retired from business, struggling to make ends meet for her and Alexandra, living off disability and what little remains from a legal settlement she received as compensation for the asbestos exposure in New York.

When the school year ends, they are planning a move back to Texas, where Alexandra was born, where her best friend lives and where she wants to call home. The prospect of moving again is a little unnerving.

“This (mesothelioma) is something that you can’t NOT think about. If it has affected me twice, you have to say it could come back and get me again,” she said. “But I tell my daughter all the time, ‘you’re lucky I’m here.’ I just have faith that it’s all going to work out for the best.”

Can you relate to Michelle’s story? Do you want to share your story with the mesothelioma community? Let us know in the comments below, on Facebook, or email us at outreach@asbestos.com.