Survivor Patricia Powell Hargrett: Faith Gets Her Through

“I miss the children so much. But I don’t miss the paperwork,” she said, and chuckled.

Her home is adorned with memories of a life lived fully. A 2005 Teacher of the Year trophy and an oversized Mother’s Day card sit on the shelves, and pictures of her children and grandchildren scatter the walls. All evoke a sense of fulfillment.

Never once amid those 25 years did Patricia suspect that teaching in the public school system could expose her to a toxin that would one day threaten her life.

And that’s not the only place she was potentially exposed.

Her husband of 44 years, Coolidge “Jerry” Hargrett, served in the Air Force and brought Patricia with him when he was stationed in Germany. They had a child in Germany and enjoyed the time they spent in the country, totally unaware that asbestos products were commonly used on Air Force bases and in military housing.

A Bright Start in Chicago

Patricia and Jerry met at a Chicago college and were married right before Jerry was sent to Germany. Upon returning to the United States, they both went back to school and continued to grow their family with the adoption of two children, a brother and sister.

Both interested in education and public administration, Patricia became a public school teacher and Jerry became a police officer. They enjoyed rearing their three children and watching them graduate college, have children and explore life’s opportunities. One of their sons, Chrisdon Hargrett, a track star in the 100 and 200 meter dash, competed in the qualifying semifinals for the 2008 Summer Olympic Games.

After 25 years of teaching children from more than 25 different countries, Patricia retired and remained involved in her community through church events and other activities.

Jerry continued higher education at institutions like Harvard University and Rollins College, worked other public service jobs, and for years now he has been an adjunct teacher for Columbia College. They joke around about how many times he has retired, which is upwards of three or four times now.

But when Patricia received her diagnosis in October 2012, Jerry knew it was time to retire for the last time. 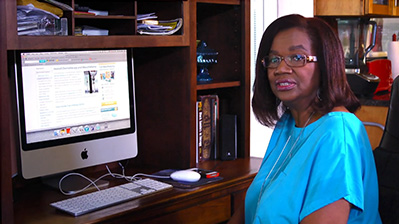 An Annual Physical Made the Difference

After an ordinary annual physical exam, Patricia was told that her calcium levels were abnormally high. Her doctor sent her to another doctor, and the follow-up tests led to a shocking diagnosis: peritoneal mesothelioma.

It was the first serious medical concern anyone in her family had to face. And they made every decision following that diagnosis as a family.

Patricia was lucky. They caught her cancer early, while the tumor was just beginning to form. Her story stresses the importance of annual checkups as a form of preventative medicine, especially for anyone who may have worked around asbestos.

Opting to work with the physicians at Orlando’s MD Anderson Cancer Center, Patricia underwent cytoreductive surgery to remove as many cancer cells as possible from her peritoneum, the protective layer that lines the abdomen. Surgery was followed by four rounds of chemotherapy over several weeks, each session lasting two or three hours.

Patricia spent about two weeks recovering at MD Anderson, and then returned home to a loving support system. Always thinking of ways that she can serve, Patricia started a nonprofit project while recovering from cancer treatment. Dubbed Warm Necks, she knitted 45 scarves for the Coalition of the Homeless while recovering and hopes to donate more scarves again this winter.

Patricia received so many cards from friends and neighbors during recovery that she had to store them in a huge box. From freshly cooked meals to helping out around the house, Patricia received support in countless ways.

“All my neighbors, all my friends  . . . I didn’t have to want for anything,” she humbly shares. “I’m always used to doing for other people. I’ve been doing that my entire life. And when this happened, it seemed like you really don’t know how much people care until something like this happens.”

A Return to Living Life Fully

About two months ago, Patricia started driving again. People tell her all the time how great she looks, that they’d never think she recently faced cancer. She’s teaching her husband how to play the piano and they love to travel and spend time together dancing, gardening and catching up with friends and family.

A month ago they took their first big trip since Patricia’s diagnosis, a cruise to the Virgin Islands, Puerto Rico and the Caribbean Islands. They traveled to Chicago in July to visit family, and because Patricia loves the beach, they’re making their way down to Fort Myers, Fla. in August. Fond of The Big Easy, they’ll visit New Orleans in September and then New York City in November for something high on Patricia’s bucket list: the Macy’s Thanksgiving Day Parade.

When asked what advice she could impart to others facing mesothelioma, Patricia says, “The best advice, I can give to anyone is to trust God and have faith that God will see you through any situation. Also, don’t be afraid to accept help from others, they are blessed by helping you. Be open, you can change the lives of others through your experience. And don’t forget to live life and help someone in the process.”

Her smile is so bright, her eyes so filled with light. Everyone loves to be around her. The presence of someone surviving cancer with such faith and optimism serves as an opportunity for others to awaken to something we often forget. It is so easy to become blinded by our fears and regrets that we forget to recognize the present moment, the sheer gift of life.

Patricia, with a tenderness of heart only known by those who have loved so fully, gently reminds us, “Take it one day at a time, moment by moment. We are not in this alone.”

© 2020 by Asbestos.com and The Mesothelioma Center. All rights reserved. | Last Modified December 5, 2018