John Conway is already contemplating a marinate recipe for the mahi-mahi he expects to grill when he returns to Florida and hops on his boat this fall, cruising into the Atlantic to start deep-water fishing once again.

He is planning a future.

Malignant pleural mesothelioma may have dominated his life recently, but giving in or giving up — is the last thing on his mind.

“I’ve got a lot more living to do,” he said from his home in Massachusetts. “A lot more fish to catch.”

And a lot more golf to play, more target practice to take, more things to fix, and a whole lot more hugs to give Mia, his adorable 10-year-old granddaughter.

Conway, 69, is a 19-year Navy veteran whose ships were part of the Cuban Missile Crisis blockade, and later the Vietnam War, serving his country proudly and heroically, never considering that his time at sea would come back to haunt him decades later.

He worked as a Navy boiler technician chief on the USS Wasps (CVS-18), where he likely was first exposed to the asbestos that led to mesothelioma, a rare but aggressive cancer that sidetracked his life.

After serving primarily on four different Navy ships USS Wasps, USS John Paul Jones, USS Dale and USS Puget Sound — he left for the Merchant Marines, where he worked for 24 more years before moving into what he expected to be a long and happy retirement.

“I grew up wanting to be in the Navy, probably since I was 12 years old,” he said. “I was proud to be there, proud to serve. It was fun, too. It took me around the world three times. I never thought about any long-range danger.”

Unfortunately, Conway served at the peak of the asbestos era, when ships were covered from bow to stern with asbestos products, particularly where he often worked.

“It used to look like it was snowing down there,” he said.

Conway was diagnosed with mesothelioma in July 2012, more than 40 years after he was first exposed, yet another example of the long latency period of this aggressive cancer.

“The pulmonologist told me I had a year to live,” he said. “When I got the news, I was devastated. This is not easy.”

“I cried my eyes out every day for a week,” Pat said.

The Conways, though, fought back. They found Brigham & Women’s Hospital and mesothelioma expert David Sugarbaker, who spearheaded their medical care in Boston. The Veterans Assistance Department at Asbestos.com guided them quickly through the often-frustrating VA claims process, letting them focus on the medical issues.

“When you first get the diagnosis, and start reading about the disease, it’s not pleasant. The more you read, the more depressed you get,” Pat said. “It was like walking through a dark tunnel, looking and searching for answers. We’re fortunate, very fortunate, to find the right people. Asbestos.com was a big help there.”

Conway endured nine rounds of chemotherapy, split between Boston and Florida. His aggressive treatment approach was sidetracked temporarily when he sustained a mild heart attack. He had surgery in January that removed the pleural lining around his lungs and all visible tumors on the chest wall.

His latest CT scan was good because no new tumor growth had appeared. He has more tests scheduled soon. In the meantime, his strength is slowly returning.

“We’ve had good days, and not-so-good days. There have been a lot of ups and down. Our hope is that John continues to progress, and we can get our life back to normal again,” Pat said.

The couple also is making vacation plans for a European cruise before heading back to their home in Florida. Conway spent much of his career on the water, and he still hopes to spend much of his retirement there, too.

“Mahi is still my favorite,” Conway said. “Marinate it in Italian dressing overnight, and put it on the grill. That’s a tough one to beat.” 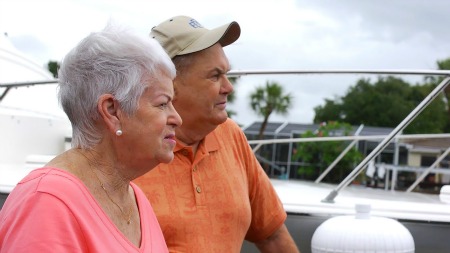 © 2020 by Asbestos.com and The Mesothelioma Center. All rights reserved. | Last Modified September 8, 2020