Frank S. celebrated his three-year survival mark by taking all six grandchildren and their parents to Walt Disney World last month, providing a weekend they would long remember.

They rode Pirates of the Caribbean together.

They all danced with Minnie Mouse.

Dozens of group photos were taken.

A family that once was engulfed by a horrific cancer cloud became a family bonded by wonderful memories being made. He had accomplished his goal.

“It was so much fun. The kids had a ball together,” Frank said after their flight back to the St. Paul, Minnesota, area, where they all live. “Everyone was happy. It turned out better than I ever imagined. Just a great family thing. Some wonderful moments the kids will remember.”

Frank, 73, was diagnosed with inoperable, malignant pleural mesothelioma in December 2012. But he has survived longer than expected by focusing on the family around him, staying too busy to feel sorry for himself. 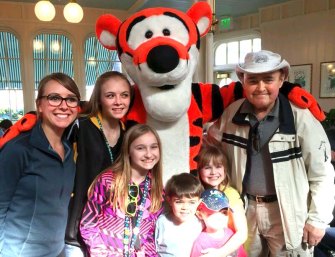 Cancer Runs in the Family

His youngest son had been diagnosed with stomach cancer in early 2012. His oldest son was diagnosed with bladder cancer a few months later. Frank’s diagnosis at the end of year seemed almost surreal.

“My wife was devastated, all three males in the family getting cancer in the same year. It was hard to believe. She got real quiet, but you could tell what it was doing to her,” he said. “It hit her harder than anyone. I had already lived most of my life, but my sons, they had a long way to go yet. I was worried about them.”

Fortunately, all three are doing well today. The younger son’s cancer has been halted with therapy that includes a continued chemotherapy regimen. The older son is cancer-free today after surgery.

Frank, whose last name is withheld for privacy, still is getting chemotherapy and regularly going to the nearby medical facility for IV fluids that offset the rocky side effects of his medicine.

None of the three are sitting home and feeling sorry for themselves. All are living active lives, working and providing inspiration to those around them.

“I really believe that keeping active is what keeps me alive,” Frank said. “You have to keep driving yourself, keep believing that you can live a lot longer. If you don’t believe that, you probably won’t.”

Cancer may have threatened to tear the family apart, but instead, it has drawn them closer together.

The sons are 54 and 50 now. The trip to Walt Disney World was just one example. They lead separate lives, each with his own busy schedule, but everyone talks to each other almost daily now.

“We get together a lot more often than we ever did before,” Frank said. “Cancer made us closer as a family. In one respect, it was a good thing, the way it drew us together again. It made us all understand what was important, and what wasn’t. We communicate almost every day. If someone isn’t feeling well, everybody is checking up on him.”

Frank spent much of working life in the restaurant and food service industry, operating, managing and then owning multiple establishments. He partially retired in 2005, but he never slowed down.

He remains an active partner in a management company that oversees a handful of restaurants and still sees each property regularly. The company has partnered with a local motel chain, and there is talk about the company building a senior center with assisted living nearby.

He talks about retirement, but he doesn’t act that way.

“I’ve got young guys doing all the real work now. I’m just a passenger,” he said. “I don’t have any endurance like I once did, but I can still get around a little. I listen, observe and offer suggestions. You could say I stay busy.”

His days of swimming laps in the community pool are gone because mesothelioma has reduced his physical activity, but he stays active by doing things at his pace. He is proud of his still perfect attendance record, spanning 24 years, at the local Rotary Club.

“That’s my lifeline, in many ways. You’ve just got to keep busy. That’s the advice I would give anyone,” he said. “This disease will do what it wants, so you have to be ready. You can’t just sit around waiting for something to happen. You have to make it happen yourself.”

He talks to other cancer patients often during his trips to the clinic, sharing advice and offering tips, much like he did during his years in the restaurant business, always willing to share and help others.

“I tell patients, don’t buy into that ‘no hope’ idea that they hear,” he said. “You just can’t give up hope. Attitude is so important. You stay positive and good things will happen.”