Lyons, 69, is a mesothelioma survivor who refuses to concede, channeling much of her energy now to Kailani, who wages this battle alongside her every day, sharing the highs and the lows.

“She’s my pal and companion. I adore her, and she adores me,” Lyons said during their drive. “Her great granddad was a United States champion for sheep and cattle herding. I have to give back to her what’s in her DNA.”

The feeling is mutual.

They flew together in May to Europe. They hiked together in Spain, did a religious pilgrimage in France and herded sheep in Ireland, where Kailani’s ancestors once did the same.

An Inseparable Pair in the Cancer Journey

Kailani was there when Lyons finished her final chemotherapy session shortly before that trip began. Kailani graciously slowed her pace when they returned home from Ireland, and Lyons struggled to catch her breath during their regular walks.

She waited outside the hospital when Lyons had the fluid drained twice from her lungs in September, which left her feeling considerably better.

“I had gotten to the point where I couldn’t walk without being out of breath. It scared the heck out of me. I thought it was the beginning of the end,” Lyons said. “But having my lung drained was immediate relief. I felt so much better.”

They left together the next week for Ireland again, where they met with Joe Joyce, a famed, third-generation sheep farmer who has trained border collies for many years. Joyce, who also does sheep dog demonstrations, worked individually with Kailani for several days. 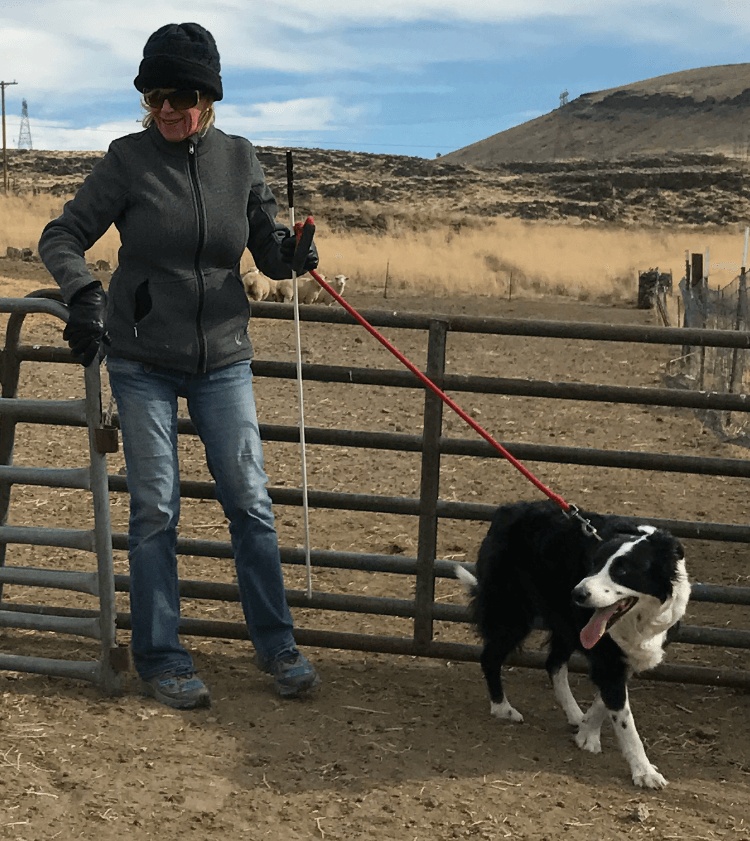 Mary Lyons and Kailani at play.

“Look, I don’t have children. I don’t have a husband, but I have so many people praying for me, and I have this wonderful border collie,” she said. “And I totally believe in God, and what he can do.”

During their second trip to Ireland, Lyons and Kailani drank holy water from the legendary Knock Shrine, where the Virgin Mary reportedly appeared in the 1860s. Mother Teresa and Pope John Paul II have stood in the same spot.

“I had been having horrible pain on my left side, my left lung, for days, but I drank the water and haven’t had any pain since,” Lyons said. “I feel wonderful. We’re back hiking again.”

Lyons was first diagnosed in the fall of 2015. For someone who lived such a healthy lifestyle and looked considerably younger than her years, the news stunned her. She had worked earlier as an international travel agent, allowing her to travel extensively.

She later became a veterinary technician. Today, she owns and operates A Marin Dog’s Life, a dog-walking business in Sausalito, California. She always has been an outdoors, fitness fanatic, preferring the mountains and hilly terrain to the big-city life. It fit perfectly with her off-leash, dog-walking business.

She has rejected the idea of surgery, preferring a less aggressive approach to treatment that included only early-stage chemotherapy. She has read extensively on the disease and attended symposiums on mesothelioma, absorbing any information she can find.

Since her diagnosis, she has changed her diet significantly, cutting out most sugars and processed foods, hoping a heavy alkaline intake will slow any cancer growth. She uses her blender extensively to produce daily juices with a variety of vegetables.

She hopes to join an upcoming mesothelioma clinical trial at the University of California San Francisco Cancer Center in 2017. It involves tazemetostat, an immunotherapy drug designed for patients deficient in the BAP1 gene, which normally helps suppress tumor growth.

“I’m going to live every day I’ve got to the fullest. I still have that zest for life,” she said. “I also think it’s a patient’s responsibility to help a doctor help you. I’m going to do everything I can to help myself. That’s why I’ve done my research. Your life is in a doctor’s hands, but nobody knows your body like you do.”

The sudden rise of immunotherapy, which most medical experts consider the future of all cancer treatment, intrigues Lyons. The drugs are designed to help a patient’s own immune system fight the cancer, unlike harsh chemotherapy which kills healthy and tumorous tissue.

Lyons often sounds more worried about 8-year-old Kailani than about herself. Kailani and she have been on more than 20 flights together. Border collies are considered intelligent, loyal, hard working and high energy. They require long walks and runs every day. Lyons worries about Kailani’s future without her.

“She watches me all the time. Even comes into the bathroom and pushes the shower curtain aside to make sure I’m OK if I’m in there a long time,” Lyons said. “She’s a big part of my life, and always will be.”