Canadian Mesothelioma Survivor: ‘Advocate for Yourself’

The Ottawa, Ontario, resident fought hard to get doctors to recognize her mysterious pain. Without her fighting spirit and determination to advocate for her health, she might not be here today.

Jayda was diagnosed with peritoneal mesothelioma at age 31 — decades before most usual diagnoses. Her diagnosis was confirmed a year and a half after her first symptoms arose. It began as a pain in her right side that was aggravated by bending over or leaning against things.

At the time, she was working in a kitchen and did a lot of bending over and leaning against sinks or tables. Eventually, the pain became constant, and she frequently ended up in the emergency room seeking an explanation. They found some fluid in her abdomen, but nothing seemed out of the ordinary.

“You have to advocate for yourself, and if you get turned down, just keep trying,” she said.

Struggle to Get Doctors to Take Her Pain Seriously

Jayda was referred to gynecologists at least six or seven times. Each time the gynecologists said they couldn’t find anything wrong.

“As a woman, especially as a young woman with abdominal pain being my major symptom, I had a really hard time convincing someone that I was in pain. Like, a really hard time. I was told it was just my period,” she said.

The incidence of mesothelioma in women is up 8 percent. Women now make up a quarter of mesothelioma cases. Historically, the disease has disproportionately affected men because men have tended to make up the vast majority of the workforce at risk of asbestos exposure.

In April 2014, after many months of emergency room visits, ultrasounds and imaging scans, Jayda convinced her doctors her pain wasn’t going away. They decided to do an exploratory laparoscopic surgery to determine where the fluid might be coming from.

That little amount of fluid turned out to be just a little more than a gallon of fluid.

During the laparotomy, her surgeon collected more biopsy samples and sent them to several experienced pathologists. All but one came back inconclusive, and it was the last sample that finally confirmed the mesothelioma diagnosis.

It took an expert pathologist who specialized in mesothelioma to identify the cancer. The pathologist said her case presented atypically, which explained why all the other biopsies turned out inconclusive.

Once they knew it was mesothelioma, they recommended cytoreductive surgery and heated intraperitoneal chemotherapy (HIPEC), which Jadya underwent in February 2015. The procedure was scheduled to take about 12 hours, but it lasted 18 hours because she needed blood transfusions. She spent a month in the hospital recovering.

Canada’s publicly funded health care system, informally known as Medicare, covered the costs of Jayda’s cancer care. All she has to pay is transportation to and from medical appointments.

Canada’s heath care system operates within each province, which meant Jayda had to travel five hours by car to Toronto for care instead of nearby Montreal, which is a two-hour drive from Ottawa. Her transportation costs quickly added up.

Then a social worker recommended Hope Air, a charity that arranges free flights for Canadians who must travel far from home to receive medical care. Hope Air not only provides flights with just a few days’ notice, but it also arranges for a travel companion to accompany patients when they aren’t feeling well enough to travel alone.

Now Jayda flies to Toronto for cancer care and doesn’t have to pay for her flights thanks to Hope Air.

In Toronto, Jayda received excellent cancer care at Princess Margaret Cancer Centre and her surgeries were conducted at Mount Sinai Hospital. She has friends in Toronto to stay with, which saves her the cost of lodging.

Likely Exposed to Asbestos as a Child

Jayda was most likely exposed to asbestos as a child through her father, who worked with asbestos products in the coal mining industry.

This kind of asbestos exposure, when an asbestos worker unknowingly brings asbestos home on their clothing and work gear, is called secondary exposure.

Jayda has four siblings, and she’s concerned about their potential prior exposure and what future cancer risk they may be facing. Her brother was diagnosed with Crohn’s disease around the same time she was diagnosed with mesothelioma.

Coping with Side Effects of Cancer Treatment

Jayda still has pain around the right side of her abdomen. Her doctors think its lingering nerve pain. She wonders if the pain is caused by a gallstone she developed more than a year ago.

Scans show two new growths in her abdomen, but doctors can’t tell if it’s cancer or scar tissue. They’re keeping an eye on it.

Every six weeks or so she ends up in the emergency room for pain or some other complication, and they usually do a scan to make sure no new cancer growth has developed. So far, so good.

She’s willing to have her gallbladder removed to see if that alleviates the constant pain she feels, but doctors say that kind of surgery is complicated to perform after cytoreductive surgery with HIPEC.

Jayda learned a lot about pain management from the Ottawa Hospital Pain Clinic. The waitlist to get into the pain clinic is usually around a year, but Jayda got in quickly by participating in a research study involving patients who often end up in emergency care for pain control.

“At the pain clinic, they give you a pain specialist, a nurse, a psychologist, a physiotherapist, an occupational therapist and a social worker. So you have all the support of people trying to figure out how to make your life easier,” Jayda explained.

Prior to working with the pain clinic, Jayda frequently went to the emergency room for intravenous (IV) hydration therapy. The folks at the pain clinic arranged for Jayda to get a permanent intravenous catheter, commonly called a port, portacath or PICC line, so she could easily receive IV hydration at home rather than going to the emergency room.

The pain clinic teaches patients that any kind of stress, whether emotional or physical, can increase the degree of pain a person feels in their body. Addressing pain management in a holistic way helps patients to reduce the amount of medicine they need to keep pain under control.

Jayda says that mindfulness techniques help her to control her pain by identifying what she’s feeling in the moment, and it helps her regulate her stress response. Yoga and other movement practices have helped her cope as well.

YACC organizes retreats, an annual conference and local meetups throughout Canada. All of YACC’s events aim to connect young adult cancer patients with others who understand what they are going through.

“It’s nice to hang out with other young adults who get it,” says Jayda. 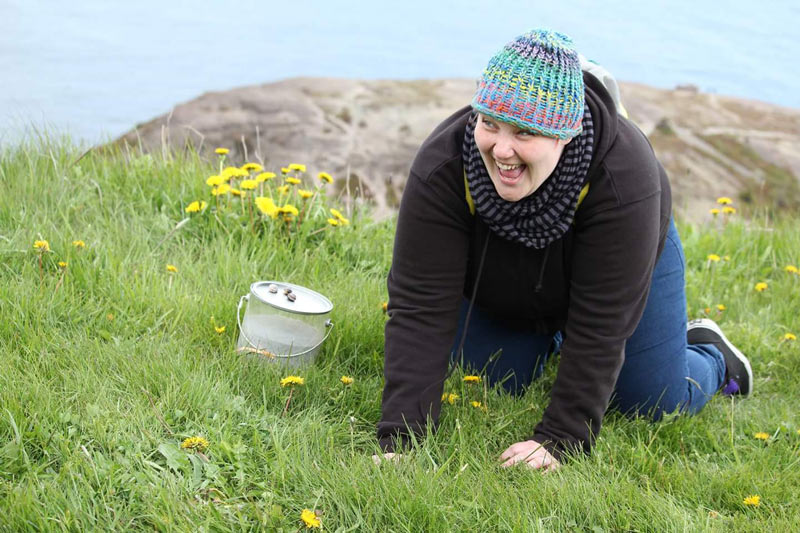 She’s been to YACC retreats, their annual conference and local events. She recently joined a Christmas potluck, a karaoke night and a trip to one of Canada’s sugar shacks, where YACC members learned all about how maple syrup is made and enjoyed maple taffy.

“Most people at this age are building careers, building families and beginning their families and their lives, and when you have cancer, that gets put on hold,” said Jayda. “Just seeing that people are as frustrated as you are with similar situations, it’s really powerful. It’s a good connection.”

Learning to Trust Her Instincts

The symptoms that led to Jayda’s diagnosis taught her a lot about advocating for her own health.

“I can listen to myself and know myself and not be ashamed of that. That’s definitely helped me out a lot, just being confident and knowing when to advocate for myself, and how important that advocacy is,” she said.

Research shows women struggle more often than men to get their doctors to take their pain seriously. Dr. Jennifer Wider, a women’s health expert and spokesperson for the Society for Women’s Health Research told Vice News, “Studies show that doctors, regardless of gender, tend to undertreat female patients and take longer to administer medication to women.”

“My whole life I’ve been going to the doctor feeling like I probably shouldn’t be there, like I was probably just a wimp, and I think what this has taught me is that I’m not a wimp. I’m actually really strong,” Jayda said.

Jayda isn’t letting her pain or physical limitations stop her from traveling. She and her partner, Alex, are planning an upcoming vacation. She can’t go anywhere tropical because of the risk of stomach bugs, and she needs to travel somewhere where she can rent a pump to self-administer her IV fluids.

She hopes to visit her sister in New Zealand soon, and she’s working on ways to travel with her supplies to do IV hydration therapy.

“Being sick has made me much more confident in myself,” she said. “I’m much more self-aware and much more trusting of my own body.”

When asked what kind of advice she would offer to other people with mesothelioma, she stresses the importance of trusting yourself and advocating for your health.

“You are your own best advocate. You are your own expert,” she said. “You know your body better than anybody else does. And if something doesn’t feel right, scream it from the rooftops until somebody listens to you.”