Historical Landmarks that Have Contained Asbestos

At one time, asbestos was thought to be a super product, but it’s now known for its fatal health implications. Asbestos was used in many materials, mainly construction materials, because of its extreme resistance to heat and ability to insulate products.

A number of occupational settings have been affected by asbestos exposure, including those in the construction, automotive, electrical, manufacturing, shipyard and mining industries. Asbestos was used almost everywhere, even after it was deemed a health hazard.

Although clinically it was mentioned in 1921 that asbestos was somehow linked to cancer, it wasn’t until 1964 that there was an actual diagnosis that linked asbestos exposure to mesothelioma. Asbestos is still used in the U.S today.

At one point these famous landmarks contained asbestos:

Capitol Hill: The 100-year-old tunnels that connect federal office buildings on Capitol Hill were insulated with asbestos, and this became a safety hazard in 2006. After deeming it a safe area, inspectors found more than 10 percent asbestos dust on conveyor belts and found that it had leaked into other areas of the building. Tunnel workers worked for many years without proper respiratory gear assuming the area was safe.

Kennedy Space Center: Asbestos was used throughout the center over the past few decades. During the launch of the Discovery, bricks with asbestos filler were damaged and an exposure hazard had to be addressed. Specific parts of shuttles were also known to contain asbestos. 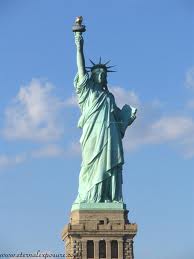 Lincoln Memorial: In 1989, a guest on a tour of the underground chamber that lies directly beneath Lincoln’s statue and armchair noticed asbestos-contaminated insulation around pipes.

Gateway Arch: The Gateway Arch opened in St. Louis, Missouri, 1965 as a monument to honor President Thomas Jefferson. The arch was found to contain asbestos in the 1990s. Since, the asbestos has been removed.

The Statue of Liberty: Designer and builder Alexandre-Gustave Eiffel insulated the skin of the statue with asbestos to prevent galvanic corrosion. The original idea was good, but the insulation had worn away decades before any corrosion occurred.

The Pentagon: Asbestos was used throughout every branch of the military, so it is somehow apropos that the headquarters of the Department of Defense had it, too. Efforts to remove asbestos began in the 1990s and were completed in 2011.

It is tough to believe that some of the most influential and most visited areas of the United States were built with asbestos. The very walls surrounding the Capital building contained asbestos, yet use of this toxic mineral is still not completely banned in the United States.

Rachel Gilner joined The Mesothelioma Center in 2010, first serving as an awareness coordinator before transitioning to public outreach and social media. Drawing on her passion for raising mesothelioma awareness, she engages the online community to inform readers about a variety of asbestos-related issues.