Last month, pleural mesothelioma survivor Al Moylan left home one afternoon on his Harley-Davidson motorcycle, joining family and friends for the 120-mile, back roads ride to Curtis’ All American Barbecue in Putney, Vermont.

Moylan topped the life-is-good, wind-in-your-face day with a delectable slab of Georgia-style pork ribs with the secret recipe sauce.

It wasn’t the first time he made the dinner trip to this out of the way biker hangout — and it won’t be his last.

At 80, Moylan still plays by his own rules.

“That’s just the way I live,” he said from the Westfield, Massachusetts, home he shares with his wife Joan. “I enjoy every damn day I have. And I never have lost my appetite for good barbeque.”

Moylan is a lifelong motorcycle enthusiast diagnosed a year ago with pleural mesothelioma, almost 20 years after retiring from his job installing, maintaining and repairing mechanical piping systems as a pipefitter in Connecticut.

Pipefitting is a high-risk occupation for asbestos exposure.

On Sept. 24, Moylan underwent an aggressive pleurectomy/decortication surgery followed with intrapleural heated chemotherapy at the Brigham and Women’s Hospital in Boston. It was his first hospital stay.

Living Life on a Motorcycle

Moylan is riding his motorcycle regularly again, much like he did in his younger days. He once raced dirt bikes competitively. He has owned several different motorcycles through the years.

None has meant more to him than the new one he found waiting in his garage when he returned from his second hospital stay in January after a serious staph infection knocked him off his feet.

“One of his sons said, ‘Mom, we need to do something now to get his spirits up again.’ So we all got together and picked it out to surprise him,” Joan remembered. “One of his goals after surgery was to get healthy enough to ride again. And I think this helped motivate him. He’d go out in the garage during the winter and just stare at it. That helped.”

He remains the patriarch of the Moylan motorcycle club. Three of his four sons ride, and two of his 10 grandchildren already have their own bikes. More are likely on the way. All of them were there when he returned home and first saw the new Harley wrapped in a bow. It was an emotional moment for everyone.

“I’ve spent a lot of time on a bike in my life,” he said. “I said at the beginning, when I beat this thing [mesothelioma], I’m getting back out there. When I went back into the hospital the second time, I felt like it was slipping away but not anymore.”

He and Joan already are planning their annual spring stay in Florida. He wants to bring the bike. They are still debating the topic at home.

“Sure, I worry about him riding, but when he does ride, he leaves the house with a smile on his face, and he returns smiling,” she said. “He just loves it.”

Keeping Busy Beyond the Bike

Moylan stays active today, even though his pace has slowed considerably. He and Joan take the 5-year-old great-grandchild to gymnastics class every Wednesday. They revel in her feats. Meanwhile, Moylan goes to rehabilitation three times a week.

They often keep a grandchild or great-grandchild at the house for extended stays. Last month, they joined one son and four grandchildren on a weekend camping trip to Old Orchard Beach, Maine. He doesn’t chase the kids anymore, but he loves watching them chase each other.

This is a man who built his own summer home, served on the city’s conservation and cemetery commissions, and worked part-time at a transfer station — all during his retirement.

“I’m still walking, talking and squawking,” he said. “I’ve slowed, can’t do some of the things I once could, but you learn to deal with that. Every day is different. If I only take 50 steps or 250 steps before I get winded, I just deal with it.”

Joan is one of the few in the family who doesn’t ride a Harley, but she is the irreplaceable foundation of a support group that has carried him through his fight with mesothelioma. She serves as advisor, caregiver, pharmacist, nurse and confidant, as well as loving wife.

“We had her on the back of the bike once, but she bit me on the shoulder, and that was the last time she ever rode,” Moylan said. “Other than that, she’s been wonderful. We’ve been married almost 60 years, but it must seem like 160 years for her. I got a really good one. Thank God for my wife.”

Joan Stepped Up to Provide His Care

Joan is the one who pushed for the mesothelioma program at Brigham and Women’s Hospital and thoracic surgeon Dr. Raphael Bueno, despite the 90-mile trek from home. 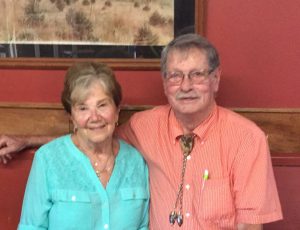 They considered a cancer center closer to home, but they didn’t consider it for long. She researched mesothelioma specialty centers extensively throughout the Northeast, and they made the decision together.

“When I was first diagnosed [close to home] and told it was terminal, it was like they dropped a piano on me,” Moylan said. “For the sake of convenience [for the family], it would have been easier to do it close to home, but I finally said to hell with convenience. I want the best surgeon there is for this disease. And we got him.”

Partially because of his age, Moylan underwent extensive presurgery testing at Bueno’s insistence. Moylan endured nine trips to Boston for a battery of mental and physical tests.

“They did everything but throw me down the elevator shaft because they wanted to make sure I would survive surgery,” he said. “And finally, [Bueno] told me, ‘I wouldn’t do this if I didn’t think you could handle it.’”

The whole family was present the day he was admitted.

His surgery lasted 10 hours. They removed the lining around his right lung, a rib, parts of his diaphragm, and every speck of tumor they could find. He was released from the hospital Oct. 13 — the day of their 59th \wedding anniversary.

On their last checkup in Boston, Joan asked Bueno about her husband and his Harley Davidson. She showed him a photo, thinking he would frown. Bueno nodded his approval and smiled.

“I liked Dr. Bueno from the first time we met him,” Moylan said. “He thinks outside the box. That’s a lot like me.”