Tamron Cox-Little didn’t plan her first pregnancy, but it turned into a bigger blessing than anyone could have imagined.

It probably saved her life.

Cox-Little is a 10-year, peritoneal mesothelioma survivor whose ultrasound late in that pregnancy first alerted doctors to a small and unusual growth inside her abdomen. This led to an earlier-than-normal diagnosis and a better chance of surviving this rare and aggressive cancer.

Baby Caleb was a godsend in disguise.

She remains cancer-free a decade later, believing the tumors are gone for good because they were caught so early.

“I had mixed emotions when I first found out I was pregnant. I was young, still in college, and we weren’t married yet. I had to come to grips with that,” Cox-Little told Asbestos.com. “But everything happens for a reason. Thank God for Caleb. Who knows what would have happened without that ultrasound. God had a plan. He was watching over me.”

Sharing Success with Her Surgeon

She returned to see Levine for regular checkups, always bringing along Caleb for good luck. And every couple years, she brought a new baby, making Levine smile broader each time.

“They’re all healthy and happy,” Cox-Little said proudly. “Every time I took another baby to see Dr. Levine, his eyes would just get wider and wider. He’d say, ‘So, this is yours, too? Tamron, you’re amazing. You’re a walking miracle.’” 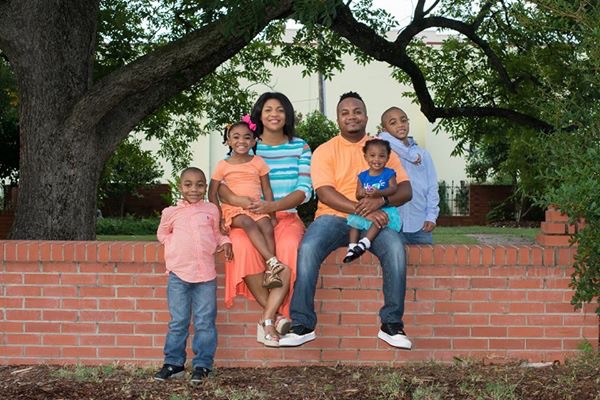 Tamron Cox-Little was diagnosed with peritoneal mesothelioma at just 21. An ultrasound during her first pregnancy alerted doctors of her cancer.

Cox-Little has emerged as a beacon of hope in the fight against mesothelioma, which typically comes with a poor prognosis.

Although therapies, particularly for the peritoneal version, are improving, mesothelioma patients rarely live more than five years after a diagnosis.

“My family, they took it the hardest when I was first told about the cancer. You could see it on their faces. My husband, my grandmother, my aunt. They were all there,” she said. “But I really believed then — and still do now — that God wouldn’t put more on me than what I could handle. And I knew I had a great doctor.”

Cox-Little rebounded better than anyone expected. There is still no sign of cancer today.

Although she left the University of North Carolina at Penbroke to give birth and have surgery, she returned to school and earned a bachelor’s degree in communications, graduating with honors.

She and Samuel were married a month after surgery. They first met at UNC-Penbroke. He is a decorated Army veteran who served before college in Iraq and Afghanistan and now runs his own business from their home.

Cox-Little wrote a marriage book, “It Takes Two,” that was published in 2015. She already is working on a second one.

She became a licensed Christian minister. And she also works at a nearby hospital as a patient relations liaison, often relaying her own experience to help others through tough medical times.

“We’re all pretty busy at times here, but I’ve got a great support system. Maybe I’m bragging, but I have a really good husband who has been with me every step of the way,” she said. “Even when I was down, he was encouraging, reminding me that God would get us through the tough times. And the children have been wonderful.”

Cox-Little had never heard of mesothelioma before she was diagnosed at such an unusually young age. Maybe that was a good thing, unaware that patients usually don’t live very long after diagnosis.

Mesothelioma, which is caused by exposure to asbestos, typically has a latency period of 20 to 50 years between exposure and diagnosis.

Cox-Little suspects her exposure might have been secondhand from her grandparents’ home, where she spent considerable time as a child. Her grandfather worked construction, a high-exposure occupation.

“We stopped worrying about that,” she said. “Most doctors I’ve talked with are shocked to hear someone so young being diagnosed. But maybe I was just lucky they caught it so early, when most people never know it’s there at that stage. Without that ultrasound, who knows where we’d be now?”

Caleb is now an exceptionally bright fifth-grader and full of inspiring hope like his mother.

During Sunday school at church recently, his teacher went around the room asking each child to share some goals in life.

“He told the teacher he wanted to get a scholarship to Harvard, be a successful engineer and make $10 million,” Cox-Little said with a laugh. “That’s a true story. I always tell him, ‘Anything is possible with the strength of God.’”

© 2020 by Asbestos.com and The Mesothelioma Center. All rights reserved. | Last Modified December 5, 2018