Rich and Aline DeLisle made the difficult decision recently to stop Rich’s cancer treatment and begin home hospice care — the final stage of his journey with pleural mesothelioma. Then, something unusual happened.

Sons and daughters, in-laws, grandchildren and great grandchildren, nieces and nephews, and friends he hadn’t seen in years, all began descending upon their Central Florida home.

They came from across town, across the state, and across the country to celebrate the life of this gregarious, fun-loving, family patriarch who rarely met anyone he didn’t like.

Rich and Aline have kept the door open.

“Instead of people coming for a funeral, we invited everyone to come now and see him before he passes — not after — when they can still enjoy each other’s company,” Aline said. “And it’s been wonderful. We never thought so many would show up. He hasn’t smiled and laughed this much in quite a while. It’s been crazy around here.”

The refrigerator is overflowing with food and drink.

Children are swimming in the backyard pool. The driveway is filled with cars that have spilled onto the street.

Overnight guests are sleeping everywhere, including couches and floors. It looks more like a hostel than a single-family home.

“We didn’t invite anyone here to sit around and mope over me,” Rich said. “I have to get ready for the party tonight.”

Rich travels mostly with help in a wheelchair now. He needs oxygen to breathe easier. He takes breaks from the pool-side chatter, excusing himself from the conversation before lying down in his room to rest.

The hospice nurse has left for the day. A minister has arrived to chat with Rich, who speaks a little softer and slower than before but with the same conviction and sharp wit he had six years ago when first diagnosed. He engages visitors and tells great stories like he always did.

The night before, he was playing the bongos with the kids around the pool. Everyone was enjoying themselves.

He repeated his familiar line with a smile:

An Inspiration to Many Others

For several years, Rich has been an inspiration to others who have been diagnosed with this incurable disease.

He has helped mesothelioma survivors through his story on Asbestos.com, his Facebook posts, his involvement in support groups, and through private email exchanges with patients.

He and Aline are well known for their energetic optimism at Moffitt Cancer Center in Tampa, Florida, where he underwent his aggressive pleurectomy and decortication procedure six years ago. He returned regularly for checkups and treatment.

“The care I received there was nothing but the best,” Rich said. “I can’t say enough good things about the way I was treated.”

Rich was told in 2012, at his original diagnosis, that he could expect to live six to nine months. He is now in his seventh year.

He beat the odds, lasting longer than anyone but he and Aline expected.

Instead of slowing down after his diagnosis, Rich and Aline accelerated the pace of the things they wanted to do together.

They wanted to see them all. 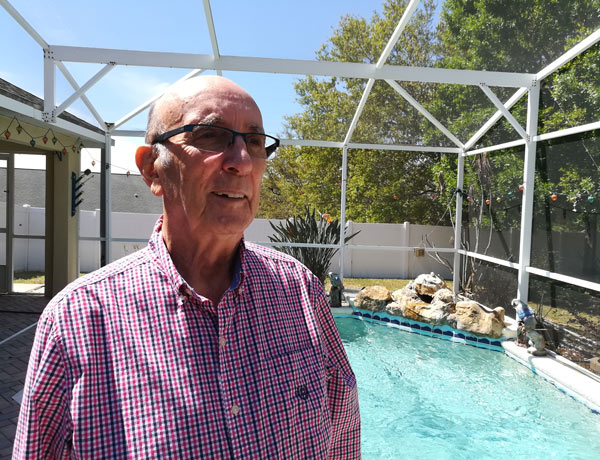 Rich DeLisle was diagnosed with pleural mesothelioma in 2012. His story and fun-loving personality has inspired many other survivors.

They took a Disney cruise, where Rich found himself on stage in a gold disco costume doing Karaoke.

The day after his original diagnosis of mesothelioma was reconfirmed at Brigham and Women’s Hospital in Boston, he and son Eric went to Fenway Park to see their first Red Sox-Yankees game together.

He later joined Eric on a business trip to Las Vegas, where he spent much of his three days at the Bellagio Resort & Casino, turning up more than his share of aces.

For the first few years, the scans at Moffitt showed no new tumor growth, lifting their spirits each time. He was unusually healthy.

He and Aline took regular weekend trips to Cedar Key, a laid-back coastal Florida community where they fished and stayed at the same quaint motel next to the marina.

The couple who ran the marina motel were two of the recent visitors to the DeLisle home, good friends who wanted one more laugh with Rich and Aline.

They all told fishing stories that had grown with time.

The Choice for Hospice Care

Despite the years of optimism, the mesothelioma tumors eventually did return — with a vengeance.

The past nine months have been especially difficult, trying to fight off the cancer and the side effects of new therapeutics.

After traditional chemotherapy failed to help, Rich tried the experimental transarterial chemoperfusion, which identifies and attacks the specific blood vessels feeding the tumors.

He tried an immunotherapy and listeria vaccine combination.

He and Aline were discussing a return to Tampa to enroll in one last clinical trial when Rich waved it off. He told Aline he wanted to call hospice instead, ending any further treatment.

“It’s just been too much on her, trying to do everything. My body is gone. I was tired of being sick,” he said. “I couldn’t take any more of those treatments. We’ve cried together enough. It was just time for something else.”

Hospice arrived the next day with everything he needed to be more comfortable. Aline started calling friends and family, making them aware of the decision.

“I just said ‘Would you rather everyone come see you after you’ve passed or now when you can still appreciate they’re here?” Aline said. “I think he’s really enjoyed having everyone here now and all that’s going on.”