Mesothelioma survivor Chris Shelton was back on his Harley-Davidson motorcycle — smiling again — just days after being hospitalized for the second time with a life-threatening reaction to a clinical trial drug combination.

There is no giving up or giving in.

Later this month, Shelton will again make the five-hour drive back to the MD Anderson Cancer Center in Houston for a third round of treatment, still hoping to stop the cancer growing inside his belly.

“At this point, it’s the only option I’ve got,” Shelton said from his home in the northeast Texas town of Mount Pleasant. “[The clinical trial] is a real commitment, a pretty rough ride, but when you’re told nothing else is working, what else are you going to do?”

Shelton, 58, was diagnosed with peritoneal mesothelioma almost a year ago. Doctors at another cancer center told him it was too far advanced for surgical resection, delivering six rounds of chemotherapy instead that damaged his liver and kidneys but failed to stop the tumor growth.

It involved the promising immunotherapy drug Tecentriq (atezolizumab) in combination with Avastin (bevacizumab), which works by inhibiting the formation of new blood vessels in tumors.

The IV treatments are every 21 days.

“I know people who have beaten cancer — just not my type of cancer — with these immunotherapy drugs,” he said. “And someday they are going to find cures for all these cancers. If me being in this clinical trial helps them do that for future patients, I’m all in.”

Shelton was stunned initially at his peritoneal mesothelioma diagnosis in 2017.

For almost a year prior, he had complained of stomach discomfort and bloating. Doctors repeatedly dismissed it as gastric problems.

For Christmas, his wife Tammy bought him a gallon jug of peppermint candy, hoping to fix the problem with sweetness.

It wasn’t until he dumped his Harley-Davidson to avoid a crash — with his 21-year-old son Cale aboard — that he discovered his problem was more serious than anyone thought.

Cale escaped the accident with only burns and scrapes across his body, but Shelton broke his neck in two places.

He was hospitalized for a month.

“The doctor came into my hospital room and said he had good news and bad news,” Shelton recalled. “He said, ‘You’ll walk again, but your blood work makes us think you have some sort of cancer.’”

After considerably more testing, the diagnosis was mesothelioma.

Doctors told him he had four to 12 months to live. That was 10 months ago.

“I think the best case scenario is that these new drugs will slow down the progression,” he said. “I’m trying to be realistic about it, maybe buy some time until they can find something that works better.” 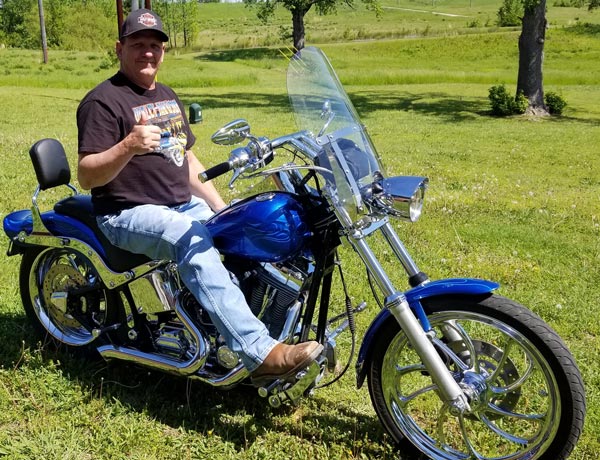 Riding the Highs and Lows

Shelton was rushed to the hospital not long after his latest treatment.

His body ached terribly, his oxygen levels dropped dangerously low and his temperature spiked before he lost consciousness.

Something similar happened after the first treatment.

Yet a couple days later both times, he felt really good again.

“You look at me now and you wouldn’t know I was sick,” he said. “I feel great. People who know me say I look fine, although my speech is off and a little slurry. My thought process is way down, but physically I’m doing well.”

The toughest part for Shelton is the sitting and the waiting, something he never has done before in his life but something his doctors are advising.

Ready to Get Well and Work Again

Shelton grew up on a Texas farm, working at a young age.

He bailed hay after school. He drove a tractor long before he could get a driver’s license and worked in chicken houses and cattle barns.

Working for the family propane business that began in 1947, he serviced well pumps and heating units.

He learned to weld and built his own house on the farmland where he grew up.

Shelton spent the last 30 years working around the country in the pipeline industry operating heavy equipment. He was rarely home.

He also was part of the recovery efforts in New York City after the 9/11 terrorist attack.

“I’m a working guy,” he said. “My family is important, but I’m not used to being home, scaling back. That’s why it’s hard for me to lay around and just rest when I know I should be working still.”

Tammy has been at his side throughout the ups and downs. 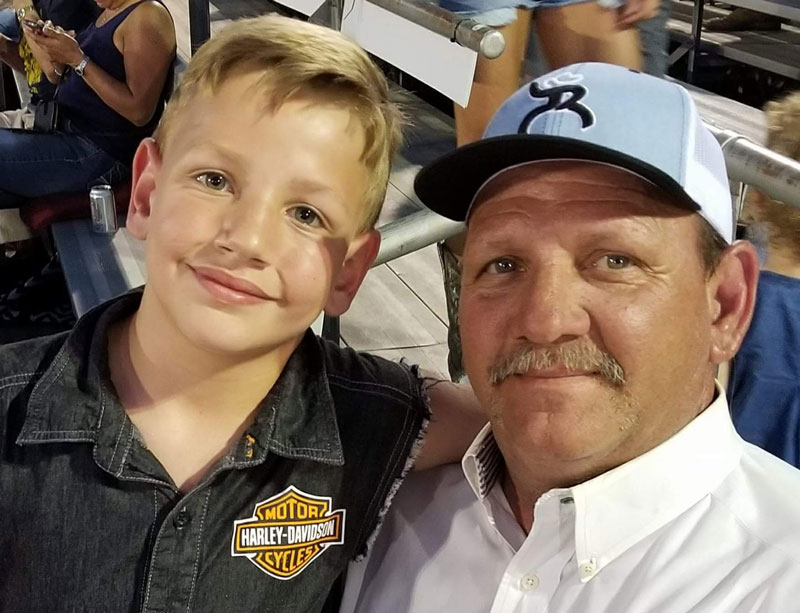 Mesothelioma survivor Chris Shelton with son Colton, 8. Shelton said Colton has been a driving force in his road to recovery.

Despite the bad reaction to the clinical trial drug, Shelton can’t wait for his next session in a few weeks, believing — with adjustments — it will work for him and slow the cancer.

His joints hurt, but he rarely shows it. Shelton can’t sit for long. There is too much to do, too much life to live.

“I’m impatient. I want everything done today. I’m ready to get ahead and get on with my life, instead of doctors, doctors and more doctors,” he said. “I’ve got a great team of doctors — they’re the best — but I’ve seen them enough. I’m ready to get back to work.”