Thoracic surgeon Dr. David Sugarbaker disappointed some patients in 2014 when he left Brigham and Women’s Hospital in Boston, where he had forged his reputation as the nation’s foremost authority on the treatment of malignant pleural mesothelioma.

The Lung Institute at Baylor College of Medicine in Houston now is Sugarbaker’s new home. There, he continues to build a comprehensive, multidisciplinary program that caters to cancer patients with mesothelioma.

His departure, though, has been a godsend for others — particularly two patients who needed him in Texas.

“Sometimes God answers prayers in strange ways,” said Sydney Roberts, a patient from nearby Katy, Texas. “And I honestly believe he answered my prayers by sending Dr. Sugarbaker to Houston at the right time.”

Roberts is one of several mesothelioma patients who recently have come to see Sugarbaker, learning what others have insisted for years in Boston: There is no one better equipped to treat this rare but insidious disease.

Kim Sanders, of Wichita, Kansas, is another. She drove nine hours to see him, but then stayed to become one of his first surgical patients in Texas when the Lung Institute opened in July.

“I’m a walking miracle now because of Dr. Sugarbaker,” said Sanders, who had an aggressive extrapleural pneumonectomy surgery seven months ago. “I feel like he gave me back my life. His coming to Texas was a blessing.”

They are just two of the patients thrilled to have him at the Lung Institute, where he continues to recruit some of the best and brightest medical specialists from around the world, hoping to build a comprehensive medical facility that is unmatched.

“If you’ve been told you have a difficult case, this is where you come now,” Sugarbaker said. “Patients come to us based on the reputation of the Lung Institute team for providing hope in even the most difficult medical conditions.”

Roberts and Sanders are survivors from different states with vastly different cases, illustrating the impact of Sugarbaker and his new mesothelioma program at Baylor.

Both women spoke last month at the Baylor College of Medicine President’s Circle, a collection of Houston’s business and community leaders who wanted to learn more about Sugarbaker’s work with mesothelioma.

They also shared their stories with Asbestos.com.

Roberts, 71, has been battling mesothelioma for five years, undergoing numerous rounds of chemotherapy and radiation, dozens of tests, multiple complications and eight different thoracotomy surgical procedures, including one to remove her right lung and parts of her diaphragm. 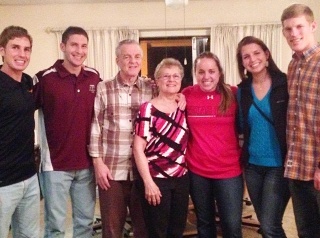 She has ridden the highs and the lows with unbelievable resolve, inspiring others with her unrelenting fight. Different centers, multiple surgeons and medical oncologists have treated her, and she always has questioned and challenged her doctors to stay one step ahead of the disease. But when they fell behind, she turned to Sugarbaker.

“I told people, I felt like a guinea pig before, and that I hoped at least what they learned from me would benefit others in the future because I was like somebody’s research project,” she said. “It’s a totally different feeling now.”

Roberts nearly lost the fight in 2014 after yet another misdiagnosis, weary of a never-ending string of complications that left her mentally and physically drained.

“After fighting so hard, I had lost all hope. I was seeing the end of the road,” she said. “I was sick almost the entire year. The pain was unrelenting. Finally, they suggested I see Dr. Sugarbaker. And then everything changed. The first time you talk with him, you realize he has the plan you need. He gave me hope.”

Sugarbaker performed her eighth thoracotomy last fall. He removed the diseased ribs the previous surgeon had refused to touch. He cleared the infection that had lingered for months and broken her spirit. He solved, at least for now, several problems she had. It was like a rebirth.

“He has me living a normal life again,” Roberts said. “The pace is a little slower than I’m used to. I lived a very active life, but for someone who was supposed to be dead two years ago, I’m doing okay.”

Roberts and husband, Ed, celebrated their 54th wedding anniversary in December. They celebrated her latest PET scan last month. Sugarbaker and his staff joined the celebration. It was her cleanest and clearest scan since the original diagnosis.

She feels better today than she has in almost two years. Roberts is back to being the same outspoken, independent patient who once checked herself out of the hospital a week before she was scheduled to leave.

“You know Dr. Sugarbaker will fight for you. He came up with a plan that no one else had. And he gives you confidence that it’s going work. He just tells you, ‘We’ll do this, and this, and you’ll be fine.’ And he always explains why he’s doing what he does,” she said. “He’s so focused, almost driven to help you get better. It’s like he’s in the battle with you.”

Roberts was cleaning plants in her back patio last month when she realized it was the first time in years she felt strong enough to complete the task without stopping to rest. She smiled at her own good fortune.

“The simple truth is, if somebody says you have mesothelioma, go see Dr. Sugarbaker. Don’t make the same mistake we did. It will make all the difference,” she said. “I know there is no cure, but he restored my faith. He made me believe I could live another five years or more.”

Sanders, 60, returned to work as an office manager at a small oil company in Wichita, Kansas, six months after having an extrapleural pneumonectomy (EPP), which removed her lung, the lining around it, the lymph nodes and a major part of her diaphragm.

It was the most aggressive surgery possible for a patient with mesothelioma, the first one done by Sugarbaker at the Lung Institute in Houston.

“I feel terrific,” she said last week from her desk at work  seven months after the surgery. “It has been a miracle, in my opinion. I feel so blessed right now. I don’t know if another shoe is going to drop, but for now I’m going to live my life, and just go for it.”

Sanders planned to meet friends after work at a nearby restaurant for a glass of wine and dinner before going home.

“I’ve got the best doctor in the world for a patient with mesothelioma,” she said proudly. “Life is good now, and I’m one lucky lady.”

The original diagnosis a year ago stunned Sanders. She had never heard of the disease, but she was fortunate that her sister-in-law quickly became the guiding force for her care.

Although they flew to Boston for a consultation, they returned home so Sanders could start chemotherapy and wait for Sugarbaker to open his practice in Texas, where it would be easier for family and friends to assist them.

She spent seven weeks in Houston recovering from the surgery and some unexpected complications.

“The man [Sugarbaker] literally came to see me every single day, Sundays, weekends, sometimes twice a day,” Sanders said. “It was unbelievable. I met his wife and she said helping patients was his passion. He gives you so much confidence. The level of care I received was beyond anything I had hoped for. I love the guy.”

Sanders struggled with her last round of post-surgery chemotherapy, but a blood transfusion made her feel new again, regaining the upbeat, carefree attitude she keeps.

“I think even my family and friends, who have been with me every step of the way, are amazed at how well I’m doing now,” she said. “And people who haven’t seen me for some time think I’m going to be all frail looking, but I’m not. I couldn’t be happier.”

Closer to Finding a Cure for Mesothelioma

Sanders and Roberts speak of Sugarbaker with reverence, like so many others in Boston before them. Both have kept his cellphone number, knowing they can call at any time for help, giving them confidence in what he does.

Sugarbaker left Boston and the renowned mesothelioma program he built there in hopes of creating a bigger and better one in Houston, giving him an ability to help more patients and move closer to his ultimate goal of finding a cure.

The Lung Institute, based at Baylor’s St. Luke’s Medical Center, includes a research institute, the world’s most advanced technology and experts from more than a dozen pulmonary, surgery and related specialties at Baylor.

After Roberts and Sanders spoke at the President’s Circle in January, Sugarbaker also addressed the participants. He talked about growing up as the son of a doctor. Sugarbaker was one of eight children, and he was taught to think big.

He told everyone about calling his father when his wife gave birth to their fifth child.

Roberts recalled that Sugarbaker said his dad’s response to the good news was, “Well, son, that’s a good start.”

“I think that’s how he feels about what he is doing at Baylor and his Lung Institute,” Roberts said. “It’s a good start.”