Mesothelioma Survivor Is Still Pushing Himself to the Limit

Pete K. traveled back to his high school days, as a serious wrestler and football player, in explaining how he has fought off the malignant pleural mesothelioma that should have killed him long ago.

It’s why he insisted on walking, refusing the mandated wheelchair, out of the hospital on his own eight days after his diseased lung, a rib, part of his chest wall and various other body parts were removed.

It’s why years later he refused the powerful pain-killing morphine they wanted him to start taking in hospice care. And the same reason he left hospice care earlier this month.

“I did a lot of serious conditioning when I was young, pushing myself to the limit, physically and mentally, and willing myself to go even further,” Pete said. “You find your limit and just push beyond it. That teaches you. That toughens you for something like this.”

This mesothelioma survivor has pushed himself past the limit again, nearing a miraculous 11-year survival mark.

Fighting Off Each Challenge

During that time, Pete endured 21 rounds of often debilitating chemotherapy, a prostate cancer diagnosis, heart problems and small nodules growing on his remaining lung. He went into hospice care 11 months ago. Friends expected the end was near.

He came out stronger than ever.

“I’m doing wonderful right now. Every time I see my primary care doctor, he shakes his head and says, “You have no business still being alive,” Pete said. “But I really believe part of that is from those early days training, when I learned to deal with pain and discomfort. You learned to find resources within you, that you didn’t even know you had.”

Pete, 70, has become a beacon of hope for those diagnosed with pleural mesothelioma today, and a shining example of just how good renowned thoracic surgeon David Sugarbaker was during many years of extending lives at the Brigham and Women’s Hospital in Boston.

Pete, a Chicago native who has lived the past 20 years in Tucson, Arizona, originally was diagnosed in March 2005 and was told he had 12-18 months to live. So he flew across the country to see Sugarbaker, who performed the extrapleural pneumonectomy (EPP) surgery in June, giving him reason to fight.

Pete also had another big advantage: His wife, Pat. She had fought and won her cancer fight just a few years before his, providing a blueprint to guide him.

She had been diagnosed with an aggressive non-Hodgkin lymphoma and told she likely would be gone within six months. Instead, she spent five months in a Phoenix hospital 120 miles away from their home with him driving back and forth every day after work. 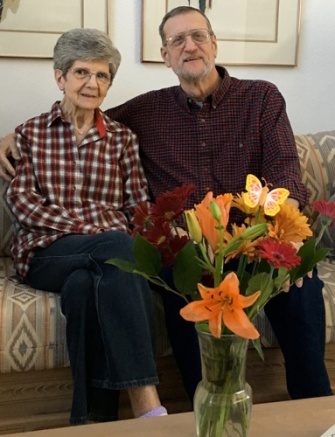 Pete K. at home with his wife, Pat

“We’ve taught each other some things,” Pat said. “We’re thankful that I was sick and got through it before he got sick. With him, there was never any ‘Why me? I don’t want to die.’ It was always, ‘We’re going to beat this.’ The most important thing we both had was a positive attitude, and that’s better than medicine sometimes.”

They’ve been married for 33 years, a second marriage for both, and never have argued once, they both insist. She asked him out for the first date. They were married a few months later. And they have lived happily ever after. Even cancer can’t break them apart now.

“She’s one of the treasures of my life. She gave me an example to follow, proving that just because you’re given a death sentence doesn’t mean it’s necessarily so,” Pete said. “She went through hell with her chemotherapy, but she came out the better. She’s been my strength through this, and a big part of why I’ve survived this long.”

Pete spent his working life as a network engineer, a computer communications expert, often with government contractors. He is wired to analyze everything, including every step of his cancer treatment. With a million questions, he became his own patient advocate.

“I don’t try to out-doctor the doctor, but nobody knows me better than me,” he said. “I know what I can tolerate, and what I can’t. The doctor and I always start with ‘If we do nothing, what is most likely to happen? If we do this, what are the side effects? What are we trying to accomplish?’ You have to stay in control of your treatment.”

Medical Marijuana Is a Huge Help

The same chemotherapy that has kept his cancer in check, also made him agonizingly sick in the early days, threatening his zest for life. Chemotherapy became tolerable once he discovered that cannabis (medical marijuana) mixed in cookies or brownies could lessen many of the harsh side effects that make it so difficult for cancer patients.

“The first time I had chemo, it was a horrifying experience, like someone running you over with a car. You’d get sick from the top of your head to the tip your toes,” he said. “The cannabis worked wonders. If used properly, and the right strain, it really is a very useful medicine.”

Pete and Pat attended his 50th high school reunion two summers ago in Chicago. They also turned the trip into a celebrated family reunion. Many were surprised how healthy he looked.

“When they saw me, they couldn’t believe I had cancer. An experience like [mesothelioma] is interesting,” he said. “You find out who you really are, and realize that things you thought were so terrible when you were younger, were really just preparing you for the real tough times ahead.”

Pete today lives comfortable in Tucson, happy to not worry about shoveling winter snow. He and Pat usually go out to dinner Friday evenings. They spend Sundays at a nature conservatory, where they do volunteer work that includes cleaning hummingbird feeders.

They watch birds. They take walks. They hold hands. 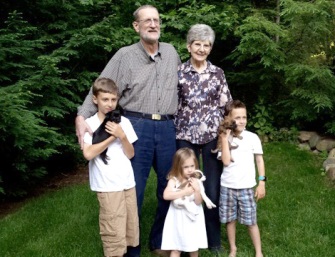 Pete K., Pat and their grandchildren.

His big project at home is building dollhouse furniture for his youngest granddaughter in Chicago. He boxes and mails each completed piece. She calls to thank him when they arrive.

“I know that ultimately, this [mesothelioma] is going to get me,” he said. “But I try not to worry too much about the future. I focus on each day. You know, there is never a time in anyone’s life when you aren’t going to die at some point. This just became a challenge when someone tries to tell you when it’s going to happen.”