Tim Povtak
Fact Checked
Our fact-checking process begins with a thorough review of all sources to ensure they are high quality. Then we cross-check the facts with original medical or scientific reports published by those sources, or we validate the facts with reputable news organizations, medical and scientific experts and other health experts. Each page includes all sources for full transparency.
Written By: Tim Povtak, Last modified: March 11, 2021 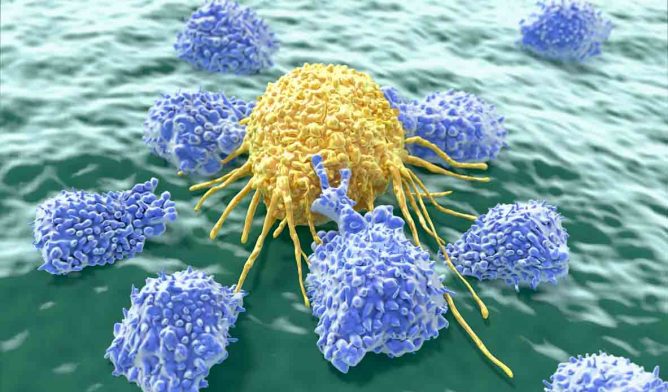 This latest therapy will be tested in a phase I, dose-escalation clinical trial. It will involve the removal and genetic modification of a patient’s T cells, a type of white blood cell, that will be separated in the laboratory through a process known as leukapheresis.

The reprograming will target mesothelin, an antigen highly expressed on mesothelioma cells and other cancers. ATA2271 is designed specifically for treatment of solid tumors.

Until recently, various T-cell therapies had been effective only when treating blood cancers such as lymphoma and leukemia. Memorial Sloan Kettering has played a major role in changing that perception.

The ATA2271 therapy is expected to advance the success already being seen in an ongoing CAR T-cell phase II clinical trial at Memorial Sloan Kettering.

“We’ve taken what we learned earlier and used the knowledge to make this latest therapy more powerful, safer and more important,” Dr. Prasad Adusumilli, thoracic surgeon and scientist at Memorial Sloan Kettering, told The Mesothelioma Center at Asbestos.com. “This is not one step forward. This is taking three steps forward.”

The most significant advancements over earlier applications should be longer CAR T-cell persistence and activity, and an automatic internal checkpoint inhibitor. This would eliminate the need for drugs such as pembrolizumab, known by the brand name Keytruda, which is used in the earlier study.

Returns from the previous trial have been positive with a 72% response rate and more than half the patients experiencing significant reduction in tumor burden. The T-cell modifications in the laboratory proved safe and well tolerated. It also targets mesothelin.

The FDA’s most recent approval was based on preclinical research from the laboratory of Adusumilli, who is the co-director of the mesothelioma program at Memorial Sloan Kettering. He presented his work at the 2020 American Association for Cancer Research annual meeting.

Dr. Michel Sadelain, director of the Center for Cell Engineering at Memorial Sloan Kettering, played a major role in developing the latest technology. The work was a collaborative effort with Atara Biotherapeutics, a T-cell immunotherapy company based in San Francisco that is sponsoring the trial.

Medical oncologist Dr. Roisin O’Cearbhaill is principal investigator of the trial that was first posted Oct. 6. She is hoping to enroll 30 patients. Cohorts of three patients will be treated at each dose level until the optimal level is reached.

Patients in the trial also will be given cyclophosphamide, a preconditioning chemotherapy, two to seven days before receiving the CAR T-cell infusion.

Adusumilli, known as an international leader in the field, believes that CAR T-cell therapy will eventually be part of future standard-of-care for pleural mesothelioma, a rare but aggressive cancer with no definitive cure.

“For a phase I clinical trial, we observed convincing safety and efficacy data,” Adusumilli said. “The new trial is built upon our clinical and laboratory observations and is promising.”

©2021 by Asbestos.com and The Mesothelioma Center. All rights reserved. | Last Modified February 8, 2021