Alert: We're here for you. Learn how COVID-19 may affect your mesothelioma treatment and doctor appointments. 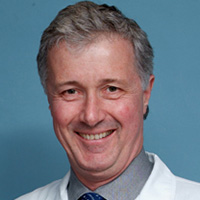 Dr. Alexander Patterson is a professor of surgery and director of the Lung Center at the Washington University School of Medicine in St. Louis.

Get in touch
Jump to a Topic:

Patterson, a cardiothoracic surgeon at the affiliated Alvin J. Siteman Cancer Center, has clinical expertise in lung transplantation, lung volume reduction, esophageal cancer and other malignancies of the chest, including malignant pleural mesothelioma.

He is known internationally as part of the surgical team in Toronto that performed the world’s first successful adult lung transplant in 1983, laying the groundwork to build a highly regarded program at Barnes-Jewish Hospital in St. Louis.

For decades, Patterson has been heralded for his leadership ability, mentoring younger physicians, residents, and fellows, along with teaching advanced surgical techniques.

He was one of the first surgeons in the country — decades ago — to emphasize the need for a multidisciplinary approach to treatment and to building a comprehensive program.

“Surgeons need to be good at interacting with, and understanding the points of view of others, as well as being effective at team building and leadership,” he said. “In prior times, there was sort of the myth that the surgeon was all important, and everybody else was irrelevant. That was never true, though, because that’s just not how teams work.”

To recognize his longtime contributions, Washington University in 2018 created an endowed distinguished chair in his name, one of the highest honors bestowed upon a clinical scientist.

For his work, he has been heralded as a surgical trailblazer in the field of transplantation, but also for his research and scientific advances.

Dr. Benjamin Kozower, who also handles cases of mesothelioma at Siteman, credits Patterson as the biggest influence on his surgical career. He calls him his hero.

Dr. Daniel Kreisel, who has worked alongside Patterson for more than a decade in St. Louis, takes a similar tone.

“I would not be where I am today, without Dr. Patterson’s mentorship in both research and patient care,” Kreisel said. “His work has had a lasting and substantial impact.”

He handles heart-lung transplants, myasthenia gravis, disease of the airway and tracheal tumors. He’s still charting a course for others to build upon.

Patterson is proponent of early lung cancer screening and the benefits it produces. But he also has been speaking for years on more obvious ways to reduce the number of lung cancer cases he sees.

“We need to focus our efforts on preventing lung cancer from developing in the first place,’’ he said. “Smoking is a major risk factor of the disease, and encouraging young people not to smoke, and smokers to quit, could have a real effect on lowering deaths from lung cancer.”

Disclaimer: Dr. Alexander Patterson has no professional affiliation with Asbestos.com.

Get Help Contacting this Doctor

How did this article help you?

This article answered all of my questions It was helpful, but I still have questions

What about this article isn’t helpful for you?

Learn About Your Options

See if You Qualify
Get Your Free Mesothelioma Guide