Before retirement, Joanne D. worked as a geriatric case manager independently and for multiple health insurance companies, spending much of her professional life caring for others.

Her work entailed helping people during difficult times, giving advice and guidance and ensuring her clients received the best care and the right course of treatment.

But in 2009, when doctors told the 65-year-old Oregon native she had pleural mesothelioma, she wasn’t prepared to manage her own illness as she did for her patients.

“When I was diagnosed with pleural mesothelioma, it was hard. I cried a lot,” she said. “But I knew the ropes, and I was able to make better decisions for myself. It sort of pushed me.”

After asking her local doctors questions only a case manager would know to ask, she knew she was in for the ride of her life. But with the help of family and friends, and the comfort of the place she called home, Joanne was ready to fight.

Not Ready to Give Up 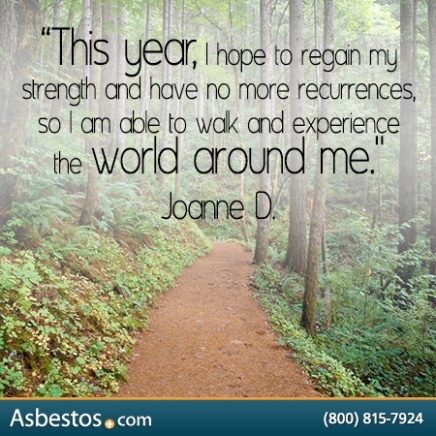 Two years after tying the knot in California, Joanne and her husband, Munroe, moved to Oregon in 1978 for a better quality of life.

The tall green trees, beautiful rolling hills, lush forests and majestic mountains were just a few of the many perks in Oregon that substituted those winding roads not too far from pristine, sandy beaches.

Oregon is where Joanne calls home, and she is not ready to let it go, not even with a rare cancer that comes with an unfavorable prognosis and few treatment options.

“I may have been diagnosed with mesothelioma, but I am going to be a survivor of this disease. You can bet on that,” Joanne said.

Learning About Her Mesothelioma Diagnosis

In 2008, she sought medical attention for pain she felt in her ribs and chest when she took deep breaths. She later developed a small pleural effusion and was treated with steroids and antibiotics. Her diagnosis at the time: costochondritis, an inflammation of a rib or the cartilage connecting a rib.

Several months later, the fluid was aspirated and did not show cancer, but rather an inflammatory process, thought to be Churg-Strauss syndrome.

Joanne saw numerous specialists to confirm this diagnosis, but none could verify it.

The symptoms escalated in October 2009. A CT scan showed suspicious areas in the left part of her chest, and doctors recommended she undergo an exploratory thoracoscopy with talc pleurodesis to stop the effusions.

The pathology from that surgery in November 2009 rendered the mesothelioma diagnosis.

“It was the most depressing appointment of my life. I could have guessed maybe lung cancer, because I had been a smoker, but mesothelioma? No,” Joanne said. “A cancer caused by asbestos exposure wasn’t even on my radar.”

After her diagnosis, her team of local doctors wasn’t sure where to go for help or treatment.

The team directed Joanne to hospitals in larger cities that have more experience with mesothelioma. She went to Brigham & Women’s Hospital in Boston in search of Dr. David Sugarbaker, who now heads the Lung Institute at Baylor College of Medicine in Houston.

Joanne arranged to fly to Boston for an evaluation, but it was harder than she thought, especially when it came to transferring her medical records to Sugarbaker’s office.

“If I didn’t have a history as a case manager, I would have been completely lost on how to move forward,” she said.

Once Sugarbaker received the necessary documentation and ran his own diagnostic tests, he diagnosed Joanne with early-stage pleural mesothelioma. He suggested she seek a second opinion if she liked. Because Joanne was determined to beat the cancer, she traveled to Houston for a second opinion before returning to Brigham & Women’s Hospital.

Joanne experienced a recurrence two years later, and treated it with surgery, which involved a wedge resection and removal of several ribs, and four cycles of Alimta and cisplatin chemotherapy.

A couple of months later, the cancer returned. She also developed several lesions in her lungs and a few on her heart. Doctors treated the second recurrence with surgery.

“In between each surgery or chemo, it was felt that there was no evidence of disease. Most of the time, there was still pain and discomfort. I would say that I had good quality of life in between surgeries,” Joanne said.

Joanne completed her most recent cycles of chemotherapy to combat the cancer’s reoccurrence in December 2013. As a result of the treatment, she experienced grueling fatigue, but today she says she feels more rested and there is no sign of recurrence. Although, she returns to her doctor every 3 months for a PET scan. Her next checkup is in October.

“This year, I hope to regain my strength and have no more recurrences so I am able to walk and experience the world around me,” she said. “I will fight for the day I get back out to my beautiful Oregon.”

An outpouring of love for Joanne is what gets her through each day: Good and bad. Her friends and family continue to surround her with the same love and support they offered on the day she was diagnosed.

“The way she handles everything is just very impressive. She just has such a tenacity about her, which is one thing I love about her, but when she needs me. I will do anything for her,” her husband, Munroe, said. “We are a team, and we’re going to beat this together.”

Kaitlyn has been writing for Asbestos.com for more than a year, she enjoys writing about topics around emerging treatment, top doctors across the nation and different aspects of mesothelioma patients and their loved ones.